Smallholder farmers in Kenya are increasing maize yields and have reduced production risk by 30 per cent thanks to a conservation agriculture project.

Declining soil fertility in recent years, increasing soil erosion and droughts due to climate change, have dipped farmers’ yields which has contributed to a rise in poverty and hunger. Maize is a staple crop for the country, and legumes an important dietary protein source for the rural poor.

To sustainably increase the yields of these crops, and to engage the poorest and most vulnerable within the sector, a food security project;  the Sustainable Intensification of Maize Legume Systems for Food Security in Eastern and Southern Africa (SIMLESA) was launched in eastern and southern Africa in 2010.

SIMLESA aims to improve soil health and drive yield increases by encouraging the adoption of ‘conservation agriculture’ (CA)-based methods, such as zero tillage, crop residue retention, and the production of improved fodder crops. By implementing such strategies, the project aims to increase maize legume productivity and reduce production risk by 30% within the decade.

In 2010, Ferdinand Wangila Makhanu from Bungoma County, Western Kenya, was an average smallholder struggling to support his family with meagre harvests from his 2 acre farm.

However, his fortunes began to change in 2010 when he was invited to a neighbour’s farm where the Kenya Agricultural and Livestock Research Organization (KALRO) was demonstrating CA-based techniques to sustainably intensify the production of maize and legume crops.

Out of curiosity, he began to copy what he had seen. “The personal challenges I faced meant I could not be suspicious (of CA),” says the father of eight. When using traditional practices, the most Ferdinand had been able to harvest was six 90 kg bags of maize, and less than one bag of beans from 1 acre of land.

However, after adopting the CA-based sustainable intensification techniques, such as spraying herbicide to prepare his land as opposed plowing, digging holes only where seeds were to be planted to reduce soil erosion, and retaining crop residue on his fields to increase soil nutrients, Ferdinand obtained 15 bags of maize and 2 bags of beans from 1 acre of farmland.

Years later, he now achieves 30-35 bags of maize per acre, and predicts his yields will continue to increase as the organic matter of his soil improves due to retaining crop residue. “CA-based intensification is the right direction for my farming and I’m sticking with it,” he says. Ferdinand has also been able to decrease his on-farm production costs.

From spending up to KSH 4,500 (US $45) per acre to plow his land, he now spends just KSH 500 (US $5) per acre on herbicides to remove the weeds. “My wife used to struggle when digging to get rid of couch grass, but one round of spraying is enough to get rid of all the weeds, and it takes little time,” Ferdinand explains. He estimates that the SIMLESA techniques have also reduced his labor costs by 60% since he no longer has to hire farm hands.

Prior to his involvement with the project, Ferdinand used to burn his crop residue or feed it to his livestock; however, maintaining the residue on his land has enabled him to produce an extra maize harvest each year because his soil is healthier. “In drier areas, CA practices improve soil-moisture retention when compared to practicing conventional tillage, and thus, crops do better,” says Charles Nkonge, country coordinator for SIMLESA-Kenya.

Ferdinand has also been able to diversify his production thanks to his healthier soil and now grows more nutritive legume crops in addition to maize, like pigeon pea, lablab, velvet bean, soybean and cowpea.

Ferdinand is part of a 50-member innovation platform, knowledge sharing and action group, which has enriched his farming methods. “Before, I was a farmer with a narrow focus, but as part of the platform, we have exchange visits and share agricultural information,” he says.

Prior to joining the platform, Ferdinand explains that he used to plant crop varieties without knowing which suited the agronomic conditions of his area, but since receiving training from KALRO through the platform, he is now aware of the varieties that will produce the best yields under the local soil and weather conditions. Input companies like Twiga Chemicals Industries Ltd are keen to work with the platform because in a group, farmers are better able to pool resources to purchase the inputs.

Within the innovation platform, farmers can also receive products at discounted rates, as it is expected that they will tell other farmers about the benefits of using such inputs. “They give us pesticides or herbicides for free to test, and sell to us at subsidized prices,” says Ferdinand, who explains that buying as a group from these companies saves farmers Sh200 to 300 on some products. 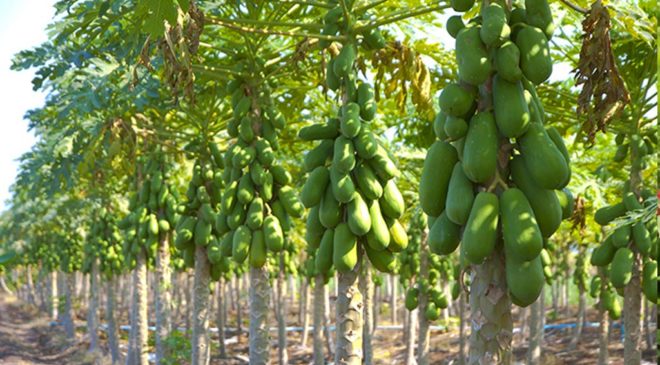 “While initially my farming was unprofitable, today I have money in my pocket and I am a local role model” he added.

The innovation platform has popularized exploits of standout farmers like Ferdinand to the media. After an appearance on the East African agricultural TV program Shamba Shape Up in 2017, 50 farmers from Busia County, 74 km away, came to visit Ferdinand to learn about CA-based intensification.

“They have all adopted it,” he says. Ferdinand also gets paid by farmer groups in other regions to train them on CA due to his farming success. “While initially my farming was unprofitable, today I have money in my pocket and I am a local role model,” he says.