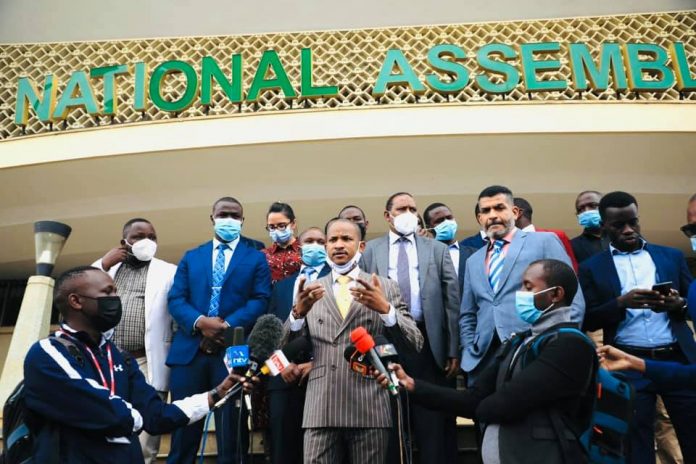 A section of Members of Parliament have come out to condemn the administration of the University of Nairobi for increasing fees for postgraduate courses and parallel degrees to ease a cash crunch brought home by a dip in student enrolment.

Addressing the media on Thursday from the precincts of Parliament, the MPs led by Embakasi East legislator Babu Owino, together with university students leaders, Kenya Medical Practitioners and Dentists Union (KMPDU) officials, they condemned university fees increment saying the move was uncalled for and it needs to rescind that decision.

‘We want the university fees to be reduced by half and not doubling it. It was done unilaterally without consultations with university students and parents who are stakeholders of the university,’ Babu Owino said.

The former University of Nairobi Student’s Organization who was flanked by several Mps also wants the government to ensure that the Higher Educations Loans Board ensures that monies it gives to students is no longer loaned to them but changed to a grant.

The university increased fees for liberal arts Master’s courses like communication and MBA to more than Sh600,000 for a two-year programme from an average Sh275,000, reflecting an increase of 118 percent.

Degree courses like commerce, economics and law under the parallel plan have been increased by up to 70 percent to about Sh1 million for the four years.

The new fees will apply to new students joining the university from this month, marking the first major fees review for postgraduate courses and parallel degrees in nearly two decades.

Police officers were on Wednesday forced to lob teargas to disperse students who were demonstrating over fee increment along University Way and Uhuru Highway.

The police officers manned all the entrances of the main campus to bar the learners from getting out and taking to the streets, even as a few of them are said to have been arrested.

The agitated students, through their union, had issued a 48-hour ultimatum to compel the university administration against implementing the fee hike among other restructuring efforts at the institution.

UoN Vice Chancellor Prof. Stephen Kiama recently said the recent fee increment will not apply to already admitted students but only to new ones seeking to join the institution henceforth.

Kenya’s Premier Campus USIU in the Spotlight Over Its Mysterious

Afreximbank and CNNIC partner for a unique multi-year initiative that puts...

Luxury tree houses that will bring to life your childhood fantasies