On this month’s episode of CNN World Rugby, host Christina Macfarlane explores the growing popularity of rugby in Kenya.

Macfarlane discovers how gender stereotypes are being challenged by Kenya Sevens Women’s team and learns of the positive impact the sport is having on young girls in the country. 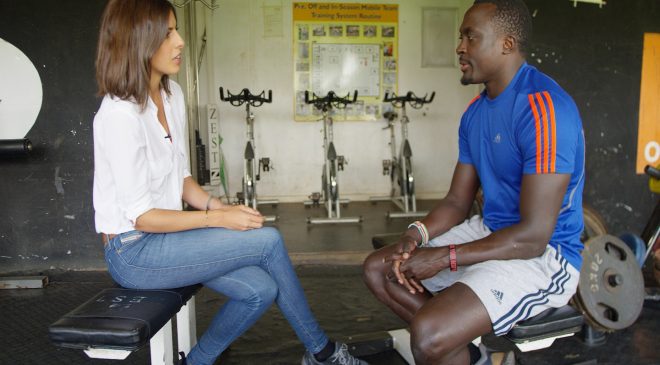 The programme also meets Men’s Sevens player Collins Injera as he reflects on his achievements and Men’s 15s captain Davis Chenge, who outlines why many rugby players are campaigning for higher wages in Kenya.

The sport has recently seen women take ownership and make their mark on the game in Kenya. Macfarlane meets the Kenya Sevens Women’s team to discover how they are working to raise the profile of women’s rugby in their country. Philadelphia Olando, Kenya Sevens Captain, describes how playing rugby is both challenging and addictive: “The level of training is very high. But once you get in there, you feel the impact, the physicality. It’s very addictive. It brings out the beast mode in you as a woman.”

Olando tells the programme that the greatest strength of the Kenya women’s team is one of community: “The teamwork, the togetherness… We fight for each other through thick and thin. If somebody has a problem, like maybe some of them have babies, maybe they are stranded in terms of paying their rent, we come together. Because we need them in the field. We need them to be part of us, so we cannot just allow them to struggle there alone.”

Being a female rugby player, however, comes with some challenges. Player Diana Awino explains how her team has received criticism in the past and describes how she has worked to encourage more acceptance of the female team: “They think it’s a man’s sport so to them at first it was hard for them to accept. They give you that look… Telling them the good side of playing rugby, like you’ll have so many opportunities, there are so many lessons, life skills. They do teach us a lot of things, how to handle yourself. There are so many things in rugby.”

Captain Olando cements this point of view by outlining the positive impact that will be generated if Kenya’s women’s team is to qualify for the HSBC World Rugby Sevens Series in 2019: “Once we qualify for HSBC, all the clubs will see [that] if we focus on the women, I think our players will get called up to the national team. They’ll be playing in the world. Also to the upcoming young girls that are interested in playing rugby, they’ll feel like: ‘If I play this game, I have something to look up to. I know maybe in the next two or three years, I’ll get a call up in the national team and I’ll play up there.’ So it will be a good thing.”

It’s not just acceptance which is an issue for Kenyan rugby teams; Macfarlane meets Davis Chenge, captain of the Men’s 15s team, who outlines why some of his teammates are concerned that they are not being paid enough by the National Federation: “A number of times, we had to miss training because of the finance issues and also it’s forcing people to have a job or have some other hustle and that takes time off their rugby training and recovery time, so sort of affects performance.”

Chenge points out that his team, known affectionately as the Simbas, has one of the largest fanbases in the continent and that this is what makes challenges worthwhile: “Wearing the lion is a great honour. It’s not something you take for granted, because you’re representing a country, the whole country, 45 million people plus, and carrying the hopes and smiles of the people, every time I’m on the pitch, every time you’re winning, they’re cheering. It’s something you look forward to.”

Macfarlane also meets Men’s Sevens player Collins Injera, who became the highest try scorer in Rugby Sevens history in 2016. Injera reflects on this achievement: “Sometimes I still have to pinch myself, in terms of just considering where I’ve come from as a player, personally, and also as a team as well. Reaching such heights just shows how far and how long I’ve played the sport.”

Injera also describes how Kenya’s defeat of Fiji in the 2016 Rugby Sevens final was instrumental in propelling the popularity of the sport to new heights at home in Kenya: “Just defeating Fiji, not by a small score, it was a huge score. And it felt really amazing. I think the first time just winning a tournament, it couldn’t have been any better with a team like Fiji. Back home everybody was happy. Everybody wanted to know, ‘What is this sport called rugby?’ I think after that win, rugby, I can say and stand corrected, to a certain point we were the number one team sport in Kenya. That win has really helped rugby in terms of development and growing the sport in Kenya.”

Also on the programme, Macfarlane meets Kenya’s first and only deaf rugby team to see how they are challenging stigmas around disability. Rugby player Dickson explains how his deafness is often misunderstood: “Being deaf in Kenya, life is hard. We have so many barriers and challenges [because] there’s a communication problem. You’re left behind most of the time. We have to self-advocate and be vigilant… When I play rugby and other people see, they’re like: ‘Oh I’ve never seen a deaf person playing rugby! How does he do that?’ So they get excited and they get the motivation to learn the basics of sign language so that we can join together, play together and enjoy rugby.”

CNN World Rugby also explores how the Shamas Rugby Foundation (SRF) is working to encourage children from disadvantaged backgrounds to try the sport and provide opportunities for self-development. Director Edoardo De Paoli explains why the SRF has been successful: “The passion for the game is huge. We have five centres with over 1,000 children participating… I never saw so much natural talent with the children and we’re only based in Nairobi… really it’s just a drop in the ocean, right? The natural talent is there, it just needs to be worked on a lot.”