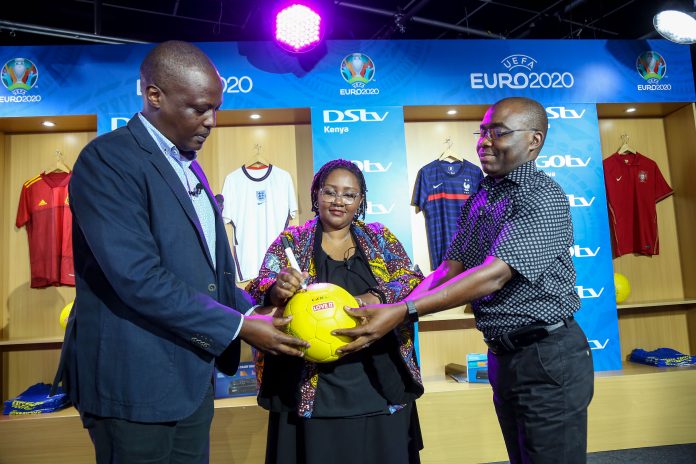 MultiChoice in its commitment to continually offer its subscribers the best sporting action from across the globe has announced an exciting coverage line-up for the UEFA Euro 2020.

With the kickoff of the highly anticipated EURO 2020 games set to stage this Friday 11 June, football fans will have access to all the 51 matches of the tournament. The LIVE games of the Euro 2020 will be available on DStv Compact, Compact Plus and Premium packages with select matches being available on DStv Family and on GOtv Max and Plus packages.

Nancy Matimu MultiChoice Kenya Managing director said, “MultiChoice Kenya is proud to broadcast the EURO 2020 games LIVE on SuperSport to DStv and GOtv customers. It is a fact that SuperSport is the home of football, and where better to connect with the Euro games than on your world of champions! We made a promise to our customers to bring only the best football from across the globe and we have made good on our promise with additional benefits including pre- and post-match build ups, expert analysis and commentary and exclusive interviews with international pundits that will not be available on any other platform. Our DStv and GOtv customers can rest easy knowing that they have already booked their tickets to the live games.”

The European continental tournament runs from 11 June to 11 July 2021 and will take place across 11 cities in Europe in 11 different nations.

Each city will host three group stage matches and one match in the round of 16 or quarterfinals, with the exception of Saint Petersburg, which will host six group stage matches, and London, which will host two matches in the round of 16. Wembley will also host both semi-finals (July 6-7) and the final on July 11. The stadiums will operate with limited capacity due to the ongoing Covid-19 pandemic, varying from 20 to 50 percent depending on prevailing circumstances.

DStv and GOtv customers have a dedicated Euro 2020 channel that will broadcast the live matches of the tournament.  On DStv, Channel 224 will be the home of the EURO 2020 and will be available from Premium to Family packages while GOtv customers can watch the games on SuperSport Euro Channel GOtv channel 32 available on GOtv Max. With added benefits like Swahili language options and live TV on-the-go via the DStv App, SuperSport will offer DStv customers an enhanced viewing experience of the soccer event so they can enjoy the beautiful game anytime, anywhere on any device.

The popular Master Plan magazine show which will air Sundays, at 2pm EAT will also make a comeback with emphasis on strategic tactical analysis. This will be complimented by the use of  technology such as the telestrator, touch screen and augmented reality graphics; a winner for coaches and former players seeking to lend their perspective.

Part of the coverage includes an all-new show on YouTube – SuperTube,  that is designed to offer a fun, engaging experience for fans including a blend of previews, reviews, analysis and fun segments in keeping with the entertaining nature of the tournament.

Online Zoom interviews with international pundits will also bring more insight on the action from Europe led by main presenters Julia Stuart, Neil Andrews and Carol Tshabalala. The studio guests will offer a wealth of insight and opinion on the tournament as it shapes up. SuperSport’s digital offering will be extensive and will include fixtures, results, live scoring, logs and top scorers – across all platforms. There will be news, match previews, highlights, team and player profiles, live coverage of every match on social, plus studio clips, analysis and magazine show content.

As we countdown to Euro 2020, SuperSport will be broadcasting a 52-minute documentary tonight, Tuesday 8 June at 9.00pm titled Whistle to Whistle. Whistle to Whistle takes us beyond the 90 minutes of a game and shares the methodology of FIFA Ranked No 1 football team Belgium. The documentary features Head Coach and Technical Director players Romelu Lukaku, Youri Tielemans, Eden Hazard and Thomas Meunier, former players Vincent Kompany and Philippe Albert. The documentary will air on the SuperSport Euro channel on DStv and GOtv.

Larmy - November 23, 2019 0
By CorrespondentOn Wednesday at around 2:45pm, a famous ousted politician from the Nairobi County Assembly called four journalists based at and accredited to...