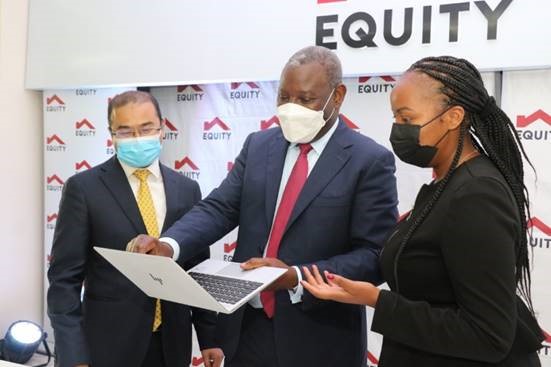 Equity Group net profit during the first six months of this year doubled to Kshs. 14.4 billion when compared to what the lender made during a similar period last year.

The profit was mainly driven by total interest income that increased 21.6% to Kshs. 30.07 billion and a 22.3% reduction in total operating expenses to Kshs.19.33 billion.

Despite an increase in non-performing loans in the banking industry, Equity Group increased the net loans and advances during the first six months of this year to Kshs. 332.8 billion from Kshs. 293.7 billion during a similar period last year.

On the other hand, the total operating expenses reduced from 19.33 billion shillings during to first six months of last year to Kshs. 15.01 billion. This represents a reduction of 22.3%.

The key highlight in the operating expenses is the loan loss provision, which reduced 73.26% from 6.73 billion shillings to Kshs. 1.8 billion.

“The defensive and offensive strategy adopted by the Group at the onset of the COVID-19 pandemic to create resilience, agility and recovery has been very effective in positioning, navigating and driving performance,” said Dr James Mwangi.

Despite this, the stock of gross non-performing loans surged from 32.79 billion shillings to Kshs. 43.83 billion as at June this year, representing an increase of 33.7%.

The lender has also increased the accumulated loan loss provision from 12.37 billion shillings as at June last year to Kshs. 22.65 billion as at June this year, representing an increase of 83.1%.

The value of digital transactions increased 111.3% to Kshs. 2.5 trillion while traditional channels like branches and ATMs facilitated transactions worth Kshs. 1.37 trillion, representing a growth of 24%.

Jubilee tells Elachi to accept impeachment and move on