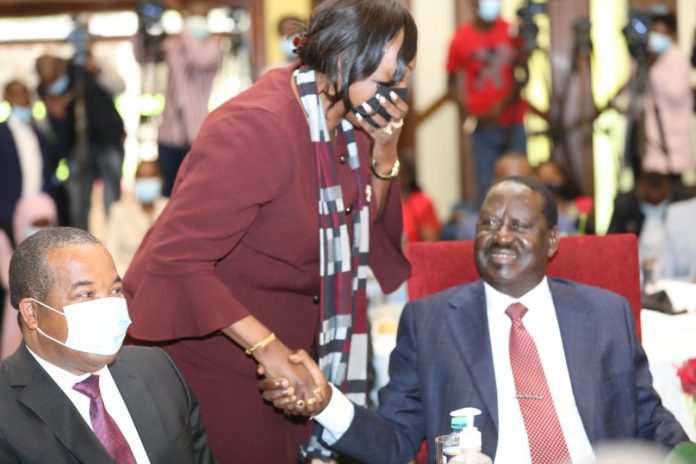 Nairobi Deputy Governor Ann Kananu was among key Mount Kenya leaders who joined opposition leader Raila Odinga in his efforts to cement a political base in the vote rich region.

Kananu,who is the first woman from the region to hold a vital position in the capital city politics,stated that there is need for leaders from the region “to unite behind a worthy course,”.

She joined the meeting as a first product of the handshake between President Uhuru and Mr Odinga.

The meeting was led by Meru Governor Kiraitu Murungi who described Mr Odinga as a focused, strategic, realistic leader and a man of sacrifice.

Also present was Lapsset board chairman Titus Ibui and a powerful group of Meru leaders, the business community and professionals who declared support for the opposition chief in his quest to succeed President Uhuru Kenyatta next year.

“Those demons which we planted, the crocodiles which we put in the rivers, we are going to remove them so that you take people to Canaan,” Kiraitu said.

The leaders pledged to lead a campaign to reverse what they confessed to being a deliberate move to demonise Raila in Mt Kenya.

Kiraitu said he played a huge role in planting Railaphobia in the region, which has voted against the doyen of Kenyan politics in his past four stabs at the presidency.

MRM awards photographers Feted during ‘Eye in the Wild’ Competition

KenGen gets the nod to sell four million tonnes of carbon...

Elves Kimutai - September 21, 2021 0
Kenya Electricity Generating Company PLC (KenGen) has been cleared to sell an equivalent of 4.6 million tonnes of carbon emissions earned over the last...

Facebook and CNN focus on Together Apart at Ramadan

KENYA LAGS BEHIND REST OF WORLD IN CUTTING DEATHS FROM SMOKING