The second edition of the COPA Coca-Cola Africa Cup will be taking place this year in Thika, Kenya from the 2nd to 5th of December.

The hosts and the inaugural champions, Kenya, will be seeking to retain the title they won last year at the games that were held in Nakuru, Kenya.

In this years edition 12 countries will be taking part, A total of twenty (20) matches will be played over the tournament period. The games format will have the twelve teams being grouped into four groups. Each group will consist of three teams. The best two teams in each group will qualify for the quarter finals. The teams will then head for knock-out matches until the best team wins.

This year, the COPA Coca-Cola tournament sought to impact behavior change by introducing plastic collection as part of educating them on the importance of a cleaner environment by taking care of plastics disposal.

In Kenya, at least 92,057.50 kilogrammes was collected in the entire championship period with five schools achieving the highest numbers and winning the pitch refurbishment in their respective institutions. These are Mutuini High from Nairobi, St. Charles Lwanga Secondary School from the Coast, Mwiruti Mixed Secondary from the Rift and Mountain region, Bishop Okul Girls from the Nyanza region and finally Nyang’ori High School from the Western region. 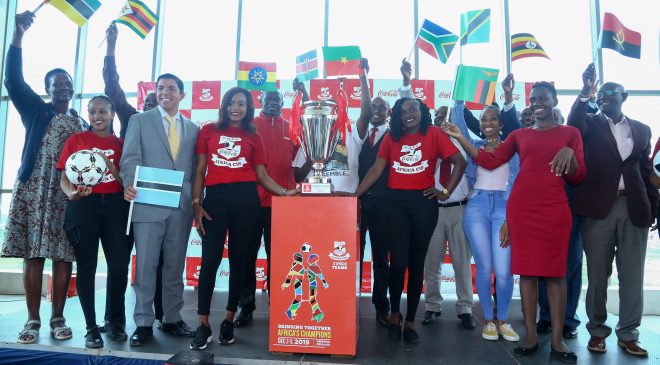 In the Pan-African tournament, twelve (12) teams will compete against each other to determine who will be the Under-16 champion of Africa. The participating teams will include, Uganda, Tanzania, South Africa, Zambia, Zimbabwe, Botswana, Angola, Ethiopia, Mozambique, Burkina Faso, Namibia and the host country Kenya.

“The COPA Africa Cup is a platform that will go a long way in ensuring the students are the next generation of soccer stars. The array of stars the tournament has provided to the national football teams of the participating teams is a testament of the crucial nature of the games. Our partner, The Kenya Secondary Schools Sports Association (KSSSA) has immensely supported and managed the tourney ensuring success of the games,” said Mr. Evanson Ndungu, Coca-Cola Marketing Manager- Kenya, The Coca-Cola Company, Kenya.

The Coca-Cola Company enables people around the world to experience and celebrate their passion for football. The company has one of the longest corporate partners of FIFA with a formal relationship since 1974 and an official sponsorship of FIFA World Cup™ that began in 1978.

“Previously, the company invested in taking outstanding players in specialized training in the COPA Coca-Cola global camps where they visited most of the football iconic cities. Now, we are exposing the students to friendly professional competitions, a wide range coaches and scouts from the best football clubs all over Africa in a bid to ensure they are scouted to continue their footballing journey. We urge all football stakeholders; parents, teachers and scouts to walk with us in this journey of unearthing African football talents and skills,” Said Ms. Phillipine Mtikitiki – General Manager, Coca-Cola East & Central Africa Franchise

The games are part of the company’s wider commitment to improve the sport in the continent. Since 1989, The COPA Coca-Cola tournament has been played in Africa each year with the first country to play the games being Zimbabwe. This is in addition to the company’s investment in the FIFA World Cup Trophy Tours from over the years where the trophy has been visiting more than 50 countries including Kenya to bring the World Cup closer to the people.