At an event celebrating excellency of media coverage of climate change and environmental stories in Africa, Kenya’s Raquel Muigai and Agnes Oloo were announced as joint winners of the 2022 African Climate Change and Environmental Reporting (ACCER) Award.

The two reporters from Royal Media Services, were announced winners from their TV production entry, “Dry death” which looked into the impact of climate change on riverine ecosystems.

As expected, the quality of entries were high and captured a wide spectrum of issues around climate change impacts on individuals, and communities. This called upon my team of jurists to extraneously subject themselves on tight timelines while adjudicating the work,” said Prof Kioko Ireri who chaired the panel of judges.

The awarding ceremony took place at a Gala Night held on the sidelines of the Commonwealth Head of Government Meeting taking place in Kigali,Rwanda.

Prof Kioko Ireri said entries by Ms Raquel and Ms Oloo were exemplary and captured the spirit of all criteria items set out in the call for entries.

From Ghana, Ridwan’s winning entry COP26 and The African Interest strived to capture the debates and issues that confronted Africa ahead of the 26th Conference of Parties of the UN Framework Convention on Climate change that took place in Glasgow, UK last November.

In the print category, Mhone of The Nation, Malawi emerged top from his entry Making Zomba Green Again . The story tells of the struggles to regreen the Zomba hills threatened by the more than 90 per cent of the rural people who turn to its forest for charcoal and firewood due to lack of access to affordable clean energy for cooking.

In the online category, Cece Siago with her This Kenyan Village Halted Deforestation by Selling Carbon Credits got judged as best in the online category. The article talks about how conservation of the mangroves is offering viable alternatives to fishing, an occupation that families had dependent on for generations. 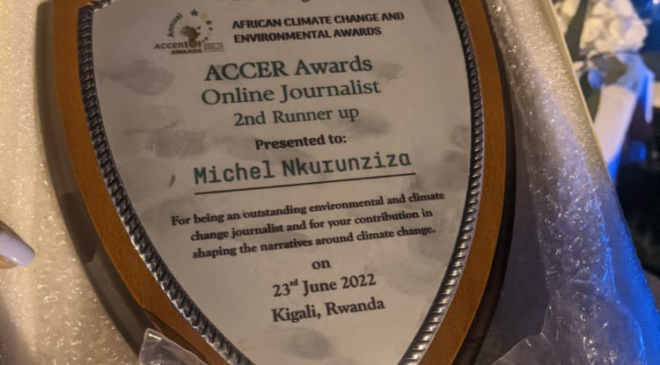 This ACCER Award is an initiative of the Pan African Climate Justice Alliance (PACJA), Africa’s largest coalition of civil society groups, faiths and community based organisations, academia, researchers and individuals who advocate for fair and just climate regimes for African people.

This year’s awards held at a time when Africa is preparing to host the 27 th Conference of Parties to the UN Framework Convention on Climate Change in Egypt later in the year.

The goal and inherent intention of ACCER is not only to reshape the African narrative as espoused in Climate Change and Environment debates but also to build a new culture of and consciousness on how we utilize biological resources in our environment and reduce our carbon footprint.
According to Charles Mwangi, the Acting Executive Director, Pan African Climate Justice Alliance said the decision to launch the ACCER Award came from the realization that CSOs and governments were limited in raising the needed level of awareness on climate change.

The decision to launch ACCER Award was influenced by the fourth report of the Intergovernmental Panel on Climate Change (IPCCC) which projected Africa as the region set to suffer the most by the climate change phenomenon,” said Mwangi. 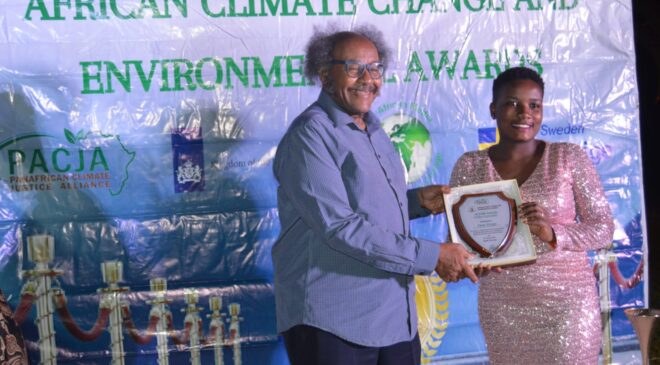 by way of growing coverage through rewarding exemplary reporting on Climate Change and Environment in Africa.