“Food tastes much better when you eat it with your hands,” declares Nairobi-based food blogger Kaluhi Adagala, using her fingers to tease some freshly baked tilapia off the bone.

“It’s like a hands-on, intimate relationship between you and the food.”Adagala is in the dining room of the Delta Plaza branch of contemporary Kenyan restaurant Nyama Mama bold with African wax prints with a colorful feast of fish, meat, samosas, cornmeal and greens prepared by executive chef Lesiamon Sempele. Nairobi is the vibrant, chaotic heart of Kenya.

It’s a fast-evolving city in sharp contrast to the ageless calm of the country’s sweeping savannah, lakelands, mountain highlands and Indian Ocean coastline. Adagala is here to tell us about the essential dishes visitors to the country should try though there’s huge diversity here in both communities and in the food.”I’d say the landscape has affected the cuisine of our people,” explains Adagala.

“People love their meat!,” laughs Adagala. If it’s a gathering or celebration, then nyama choma Swahili for roast meat, usually goat or beef — is sure to be center stage.”It varies from region to region,” says Adagala. “In the west, we might roast goat with eucalyptus wood, but in Nairobi it’s just a normal roast and served with kachumbari.”Kachumbari (or salsa) “goes well with everything,” she adds. “It’s very simple to make. I like mine with tomatoes, a splash of lime juice, some onions and chili.”Ugali, a polenta-like cornmeal slab, is the other essential side dish. It’s “our staple food,” she says, but it’s “an acquired taste.” Outsiders might complain it’s bland, but for Kenyans, it’s the ultimate starchy comfort food, and with the right spicy accompaniments, it comes to life.”Have ugali with some vegetables and a very rich meat dish, like well-cooked tilapia or matumbo, to bring everything together,” advises Adagala.Matumbo, or tripe, “is dark and black and looks like a towel,” but served up in bao in Nyama Mama’s Asian fusion take on a Kenyan classic, it’s some of the tastiest stomach you’ll eat this year.”We are not wasteful at all,” says Adagala. It’s not just offal that’s on the menu. When the goat is slaughtered for the nyama choma, its blood might find its way into a mutura sausage, a spicy delicacy of offal, garlic, ginger, chili and coriander, all bound together by the red stuff. 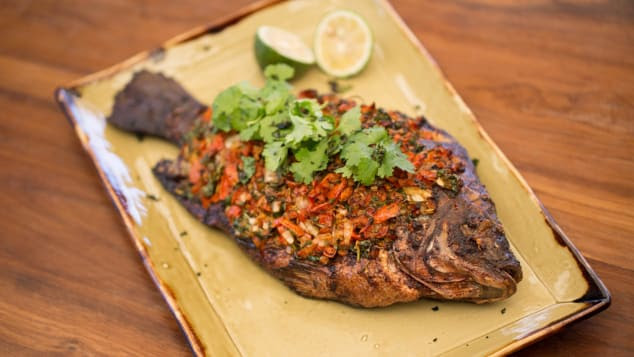 “Tilapia is the most common fish in our country,” says Adagala, and, traditionally, it’s often fried. The vast Lake Victoria, which Kenya shares with Uganda and Tanzania, is the main producer of freshwater fish.Uduvi (shrimp) and kamba (prawns) are particularly delicious wa kupaka, which means “with a rich coconut curry stew.” Kuku kienjeyi — free-range chicken — is also a top candidate for the coconut treatment. 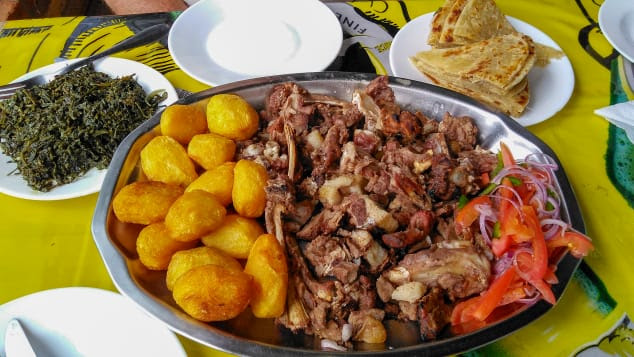 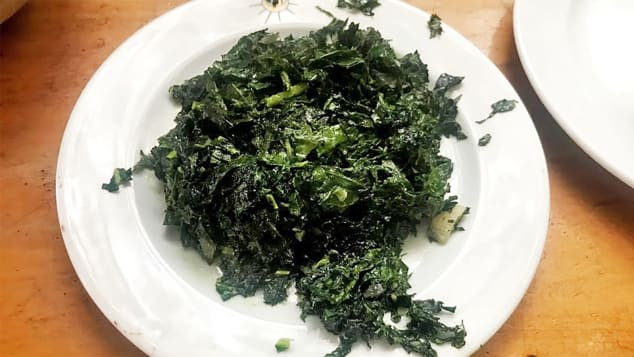 Nyama choma might be popular for gatherings, but when it comes to everyday eating, “Kenyan cuisine in its essence is actually heavily vegetarian,” says Adagala.One of the country’s vegetable staples is sukuma wiki, collard greens cooked with onions and spices.

Its literal translation is “end of the week,” typical of a food culture which traditionally has been more about subsistence than extravagance.”Mboga is the umbrella term for vegetables,” explains Adagala.

“We have many traditional vegetables which are common in the western part of the country, whch is where I came from.” Kanzira is African kale, managu is African nightshade and terere is “similar to wild spinach.”Adagali recommends trying githeri, a casserole of maize and beans, with a side of avocado, while other popular pulses include ndengu (mung beans) and njahi (black beans).

Every cuisine benefits from a starchy potato fix, so for the Kenyan twist try viazi karai (fried potatoes) or viazi via ryo (potatoes in a tomato and coconut sauce). Mukimo is a vividly hued mash of potatoes and green vegetables while irio is a variant with peas and corn.

And then there’s matoke, which is part of the plantain family. Adagala says “it’s a lot starchier, a little bit less sweet” and “fantastic for stewing.”

Kenya has a large Indian population, a migration which began in the late 19th century when indentured laborers were recruited from British-ruled India to build the Kenya-Uganda railway.There are plenty of Swahili classics whose names will sound familiar to fans of Indian food chapati, samosas, bhajia, biryani and pilau — although they’re given a local spin.

Kenyan chapati, for example, are made with white or all-purpose flour, and are fried in vegetable oil or ghee before serving.”For festivities, we like having pilau, and also masala fries (French fries with spicy sauce), because they’re just considered a bit more festive,” says Adagala.Cuisine on Kenya’s eastern coast is influenced by the fresh ideas and ingredients brought in by trading with India and Arabic countries.”The coastal people are more expressive when it comes to spices, they’re very bold and very assertive,” explains Adagala. 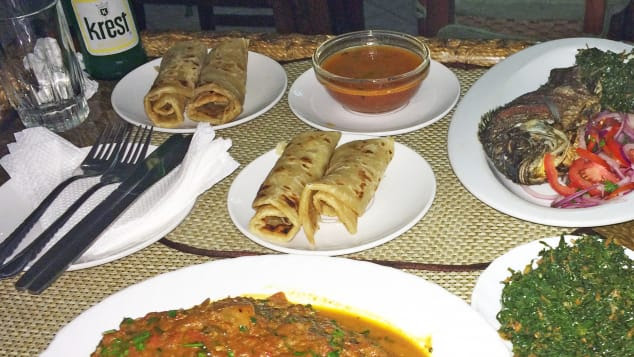 Mendazi samosa-shaped but donut-tasting are a delicious breakfast treat. Vibibi, rice and coconut pancakes, are another light, fluffy delicacy to start the day.

And of course, you need something to wash them down with.”We export the best coffee in the world but what Kenyans really love is tea,” says Adagala. Chai masala, lightly fragrant, lightly sweet, milky tea, is a breakfast classic.Tea might often be enjoyed at breakfast with nduma, a starchy tuber which is prepared simply by boiling with a pinch of salt.Alternatively, Adagala prepares it with a crispy coating:

Falooda, an Indian-style milkshake, is another of the imports to have made it here from Asia.When it comes to street snacks, sugar cane is often seen for sale. Kenyans old and young like to slice it up and suck upon it like a straw.

“For the older folk there’s an alcoholic juice called busaa; it’s made using fermented soghurm flour,” says Adagala. “You put fermented soghurm flour or just the seeds in a big pot, pour in some water and some yeast, then let it ferment.” When it’s ready, men like to “gather around the pot and they all drink from it.”

Where to eat in Nairobi

Nyama Mama is “one of the best Kenyan restaurants” in Nairobi, says Adagala. “It’s very popular because it takes Kenyan classics and gives them a nice twist.”She also recommends Swahili Plate, in the Central Business District, for tasty, no-nonsense local cuisine, and for nyama choma she recommends Roadhouse Grill and Carnivore. “Carnivore does everything from beef to crocodile to duck. Everything!,” she says.And for Kenyan-style gourmet burgers, her top tip is Mama Rocks, at hip hangout and “creative hub” The Alchemist.