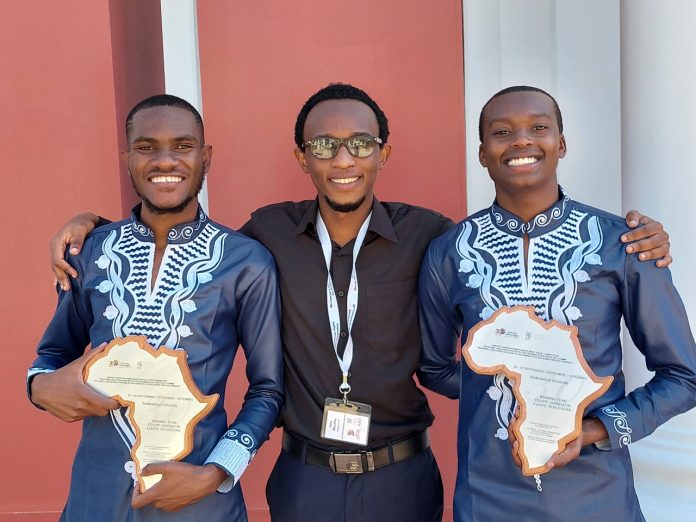 Kenya Law Students have beaten 38 universities in Africa to emerge winners of the African Human Rights Moot Court Competition, the biggest competition of its kind in Africa.

The team of two from Kenyatta University School of Law, Sidney Tambasi and Martin Kioko won the competition after trouncing the combined team of Stellenbosch University (South Africa) and  Eduardo Mondlane University (Mozambique) in the finals.

The Kenyatta University team shared the victory stage with Ivory Coast’s Félix Houphouët-Boigny University in a format that sort to bring together one English-speaking team with one French-speaking team to form one group for either side of the finalists.

Tambasi and Kioko who are also finalists of last year’s Nelson Mandela World Human Rights Moot Court Competition where they beat Oxford University (United Kingdom) in the semis are both fourth year students at the Kenyan University.

Speaking at Stellenbosch University, shortly after the announcement, the winning duo thanked the Kenyatta University staff and the support team that steered them to victory.

“We are greatly indebted to everyone that supported us and ensured that we make the podium finish,” said Tambasi.

The biggest physical forum in the human rights calendar in Africa, African Human Rights Moot Court Competition brings together students, scholars, practitioners, and leading jurists in Africa for a one week contest.

The competition runs alongside a human rights conference which has a set date within the week for academics to present papers. This year’s theme for the event was tailored to focus on equality of  all people in the face of  Africa’s huge diversities.

Heys who was a GIANT human rights professor in Africa based at the University of Pretoria, and was a member of the UN Human Rights Committee. Prof. Heys passed on in March this year.

Jacktone Lawi - June 3, 2020 0
With the gradual increase of COVID – 19 infections across the country, Nestlé Kenya has stepped in to support the Kenya Red Cross Society...

OPINION: Energy Efficiency Will Decide Whether We Meet Our Global Climate Targets!