The Kenya Platform on Climate Governance (KPCG) urges the government to conserve the Mangrove forest along the coastline saying that the conservation of the Mangrove forests could influence the magnitude and duration of Kenya’s benefit from her planned blue economy.

In a statement released on the International Day for the Conservation of the Mangrove Ecosystem, Anne Tek, the National Coordinator for the KPCG said conserving the mangroves will improve the coastal environment and boost the contribution of the blue economy to the national GDP.

“Mangroves provide breeding grounds for the fish, which contributes to the national economy,” she said.

Currently, more than 30% of the continent’s population, or roughly 200 million people, consume fish as the main animal protein source and micronutrition. Besides, 12.3 million people in Africa work in the fisheries and aquaculture sector, with 6.1 million (50%) being employed as fishers, 5.3 million (42%) as processors and 0.9 million (8%) as fish farmers. In terms of economic value, fish produces an estimated total of US$24 billion annually, accounting for 1.26% of gross domestic product (GDP).

Goodluck Mbaga, an environmentalist and conservationist in Kilifi County said the mangroves support improving the health of the ocean.

“Conserving mangroves has lots of benefits besides providing alternative means of sustenance for the coastal communities,” said Mbaga.

Celebrated first on June 26, 2016, World Mangrove Day aims to raise awareness of the importance of mangrove ecosystems as “unique, special and vulnerable ecosystems” and to promote solutions for their sustainable conservation.

Mangrove occupy 1% of Kenya’s land mass and constitute 3% of Kenya’s forest cover. Most of these mangrove forests are in Lamu, Tana River, Kilifi, Kwale, and Mombasa Counties, particularly in protected bays, creeks, estuaries, and river deltas.

In Kenya, World Mangrove Day was marked in Kilifi County under the guidance of the Kilifi Chapter of the Kenya Platform on Climate Governance. The ground has been mbilising communities in the county to plant mangroves, and accompany this with a series of meetings, and community engagements through online campaigns, radio talk shows, and performing art. 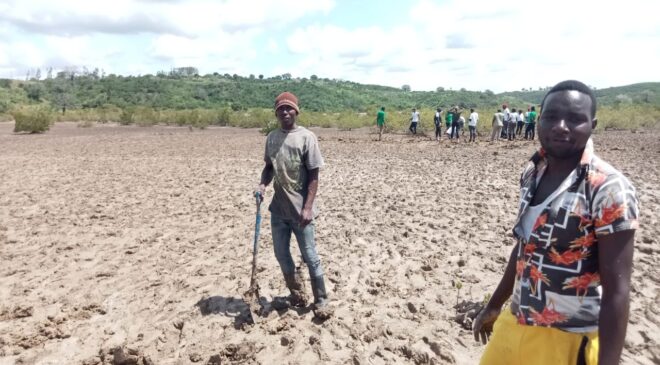 “We plan to work with the County and National Governments to ensure that the conservation programs do not fail. When we fail, the entire coastal ecosystem will be affected,” said Banda.

The mangrove ecosystem as a natural resource is an important pillar in human social development, which helps facilitate the right to a clean and healthy environment as enshrined in the Kenyan Bill of Rights.

They also provide numerous essential ecosystem services for the local population and if well utilized can create sustainable support for the entire nation and the region. In addition, mangroves contribute to a large number of the United Nations Sustainable Development Goals (SDGs).
According to the UN Environment Agency estimates, the global mangrove forests sequester within their roots, trunks, and soil as much as 22.8 million tons of carbon each year.

The past decades have witnessed a drastic global decline in mangrove areas and the degradation of existing mangrove forests. This has in turn elicited a lot of interest among community groups to rehabilitate mangroves within their localities. Over the last three years, Kilifi County has mobilized members of communities to plant over 50 million mangroves and have witnessed a success rate of 80 percent.

The coastal plant has gained prominence in the fight against biodiversity and climate crisis. Along with other coastal ecosystems, mangrove forests are among the most efficient nature-based solutions against climate change.

The theme of this year, Mangrove Day, is ‘Wetlands Action for People and Nature’, which highlights the importance of actions to ensure the conservation and sustainable use of wetlands for humans and planetary health Stakeholders operating in Peri-urban mangroves.