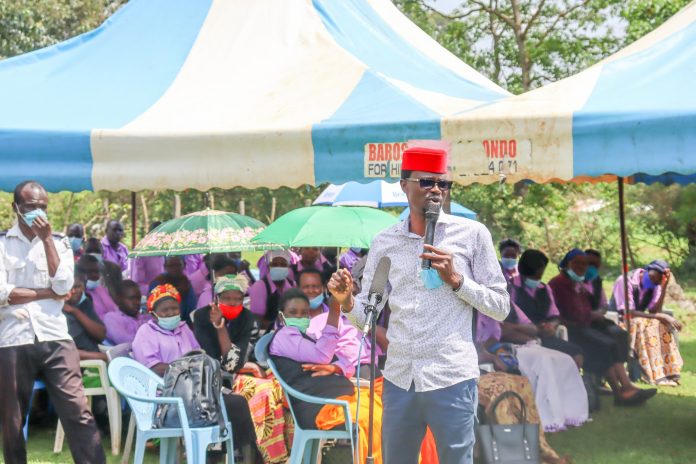 This is after the said the said goon emerged from the crowd and grabbed the microphone from Hon Didmus Baraza who was addressing Mourners and tried to wrestle him down.

“If you shout at a leader when he is speaking to you, you will never give birth to a leader in your house. Respect me kindly and let me speak my mind, and when your time comes you will be given a chance to address and speak your mind” Baraza stated.

The vocal legislator took his kindness to another level by recuing the person and taking him to hospital.

“I had to rescue him, I found him seated on the ground after being manhandled by the crowd” Baraza said

Baraza Eulogised the late as an ardent champion of education to a level she earned herself the name Omukhana wa University which Literally translates to the University girl.

The alleged Goon who is said to work for  Governor Wangamati is currently hospitalized at Kimilili Subcounty hospital.

Kimilili MP later own claimed that Bungoma residents made gravy mistakes by electing Wangamati as their county CEO who wasted time hovering from one BBI meeting to the other and forgot what he was elected for.

”We’ve nothing to write home about with over 36B we’ve so far received as a county for the last 3 years, the best Our Governor can do is to send goons to attack anyone differing with his ideologies’,’ Said the law maker.

BM Foundation call for action to conserve the environment

MCAs in a New Scheme to Kick Out Imwatok and Guyo

Elves Kimutai - July 13, 2020 0
Eugine and Oparanya on the receiving end; undressed pants down by Hon.Ayub Savula,termed as Luhya auctioneers and squatters in the mulembe nation.

Kenya Rapid Response against the spread of COVID in Africa