This, as the airline embarked on a global campaign to phase out Boeing 747 from its fleet by mid-2021 in favor of the more fuel efficient, environmentally friendly and state of the art latest version of the Boeing 787-10.

The move made Kenya the second destination in KLM’s African region to receive the new aircraft after Tanzania in July this year.

Underscoring the airline’s confidence in the future growth prospects of Africa, KLM was the first European carrier to fly that new type of aircraft, cementing its position as a pioneer in aviation. It was one of the airlines that continued to make a positive impact in Africa and beyond. 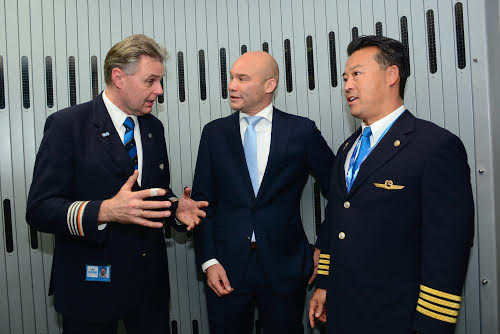 rport to welcome the flight was KLM General Manager for Eastern Africa region Mr. Arthur Dieffenthaler among other guests.

“KLM has been flying for a century now, and half of that time, we have been flying to Kenya. The region remains special to us and is a strategic hub in Africa. As such, we look forward to the next 50 years and more flying to this exciting destination, famous the world over for its scenic beauty, unique culture, welcoming people and long history as the Cradle of Mankind,” said Mr. Dieffenthaler

Based on their long history of being in aviation since their establishment in 1919 and cutting-edge technology, KLM continuously invest in enriching their customer experience from the first step of purchasing the ticket.

They  have also invested heavily on their hub Schipol to give their customers the needed comfort in their lounges and seamlessly connect East Africa to the world.

‘We look forward to exciting times ahead and we remain confident,” Concluded Mr. Dieffenthaler

KLM was established on 7 October 1919 and is the world’s oldest airline still operating under its original name. Celebrating 100 years of global operation on 7th October. KLM started its operations in Kenya on 19th May 1969. KLM will celebrate its centenary this year.

Operating out of its home base in Amsterdam, the KLM Group served its global network with a fleet of 209 aircraft in 2018. KLM employs 33,000 people. In 2017, the KLM Group generated EUR 10 billion in revenue.