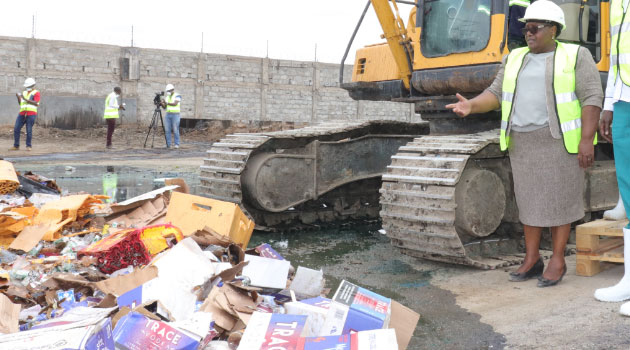 The products seized from various traders in Nairobi and its environs, were being sold in contravention of the Excise Duty Act and various regulations and would have resulted to a loss of taxes worth over Kshs. 400 million.

Among the products destroyed were 379,760 bottles of spirits, 60 drums of raw spirit, 35,615 bottles of beer, 11,000 bottles of wine and 197,000 packets of cigarettes. Several rolls of counterfeit excise stamps were also destroyed.

The destruction exercise marked a significant milestone in the fight against illicit trade and contraband goods in the country.

The exercise further underscores the government’s commitment and determination in eradicating illicit trade in the country.

KRA impounded the products during various operations carried out in collaboration with the multi-agency team. This team, established by the President in May 2018, is responsible for combating illicit trade.

It consists of various government agencies including the Office of the President, Ministry of Interior and Coordination of National Government, Kenya Bureau of Standards (KEBS), Anti-Counterfeit Agency (ACA), NACADA and the Department of Public Health.

Illicit trade not only causes unfair competition to legally trading products in the market but also poses potential health hazards to unsuspecting consumers.

Illicit trade and contraband goods are also harmful to the economy as they lead to loss of government revenue through tax evasion.

Key among these strategies is leveraging on state-of-the-art technologies such as the Excisable Goods Management System (EGMS). Since its implementation in 2013, EGMS has yielded remarkable results in combating illicit trade in the alcoholic drinks sector and on tobacco products.

KRA has also decentralized the operations of its Enforcement Division. This Division carries out market surveillance to ensure that trade involving excisable goods is carried out within the confines of the law. We have deployed more surveillance teams countrywide to step up the fight against illicit trade.

KRA is also leveraging on intelligence gathering to combat illicit trade and eradicate contraband goods in the country.

We appeal to members of the public to join hands with the government in fighting this vice through provision of crucial information on any persons or businesses involved in this practice. Any information provided will be handled with utmost confidentiality.

KRA has a mandate of trade facilitation and is ready to facilitate all law-abiding traders. We however warn perpetrators of illicit trade and traders dealing with contraband to cease the illegal practices or face the law.

Traders found with illicit goods will have their premises closed and trade licenses withdrawn.

Larmy - June 15, 2021 0
Credits CNN Call to Earth.The Peruvian conservationist has long held a passion for marine life and she tells CNN about why the oceans need...

Kenya to accelerate the adoption of circular economy