The Kenya Revenue Authority has officially taken over revenue collection in Nairobi County as part of the deed signed on transfer of functions to the national government.

The deed signed between Governor Mike Sonko and Devolution Cabinet Secretary Eugene Wamalwa allowed the authority to be the principal agent for the overall revenue collection in the county.

The handover happened shorlt after the gazzetement of Allan Igambi who replaces Pauline Kahiga as the Finance CEC. 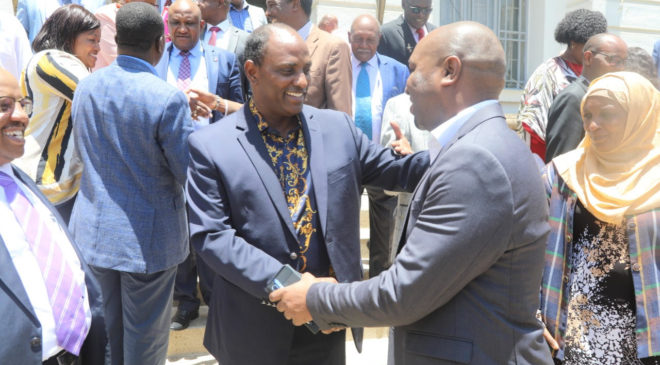 KRA is expected to help salvage the dwindling revenue fortunes in the county, with the county assembly’s Budget and Appropriations Committee warning that the county could register a deficit of more than Sh1billion.

The County had collected Sh 4.6 billion by the end of January this year, which is Sh 700million less compared to the amount collected same time last financial year.

The authority will in the next few days spell out models of payment through which residents will make their payments.

In his remarks, Yattani said that the move will not affect county employees working in the finance department, noting that they will remain integral and key to the revenue collection process.

“No one will lose their jobs because the takeover is geared towards attaining efficiency and helping the county collect more,”

The county promised to work closely with the authority in availing necessary and relevant data on various revenue streams to make work easier.

“We are going to cooperate and do everything necessary to help KRA carry on the process without any problem,” said finance executive Allan Igambi

The County Assembly’s Budget Committee chairman Robert Mbatia hailed the move but called on KRA to hold more consultative meetings with relevant players lest they perform even badly than the county.

“They need to consult a lot and gather all the relevant data that will help them avert the big drop that is expected,” Mbatia said.