Maendeleo Chap Chap party leader and presidential aspirant Dr Alfred Mutua has challenged the recent judgement by Justice Weldon Korir that sitting governors who harbour dreams of vying for the presidency be compelled to resign from office six months before election.

Dr Mutua termed the judgement by Justice Korir as unfair and discriminatory and did that it should be contested.

“Kenya needs to be a country that encourages fairness so that all persons who aspire to run for the highest office in the land are offered equal opportunity to compete,” Dr Mutua said.

Governor Mutua who has expressed a desire to run for the presidency in the 2022 elections said that the judgement compelling governors who aspire to run for the highest office in the land to exit office six months before their terms should be challenged in court to ensure fair play.

“That requirement is the hallmark of unfairness and it must be gotten rid off,” Dr Mutua said.

Last week Justice Korir, in a judgement where the election of Gatundu North MP Anne Wanjiru was nullified because at the time of being nominated to run she was also a MCA, the Judge also proceeded to find that Governors who have ambitions for offices in the national government should resign six months to the elections.

The ruling compels second term Govenors who wish to contest as President, Senators, Members of the National Assembly or Women Representatives to resign by February 2022.

“This is unfair and discriminatory. Elected leaders can only vacate office in the manner contemplated in the Constitution. Elected officials are not ordinary public officers. To cut their term short is to undermine the democratic will of the people who elected them for a specific term,” Dr Mutua added.

“It is unfair that I would have to resign yet my main competitor, Deputy President William Ruto would not have to resign,” Governor Mutua added. 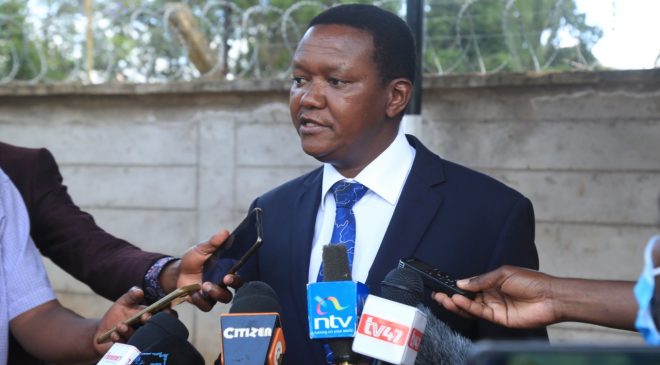 According to Justice Weldon Korir, the only holders of political office who can stand in a presidential election without relinquishing their offices are the President, the Deputy President or MP.

“Not even a governor or deputy governor is exempted by the provision. The reason is that in the constitutional matrix, governors and deputy governors belong to the same family with MCAs,” said Justice Korir. This means that an MCA cannot participate in a presidential election before quitting his seat.

The judge added that the drafters of the constitution created a distinction in the qualifications and disqualifications for persons who want to contest seats in the national government and those seeking political offices in county governments.

Dr Mutua was speaking in Nyeri during a ceremony to sign a memorandum of understanding for support of aquaculture with the Ministry of Agriculture, Livestock, Fisheries and Cooperatives.