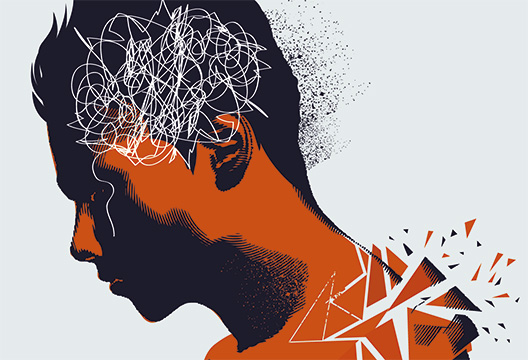 Compared to other negative adverse effects such as Covid containment measures, diminished income has been the biggest risk factor when it comes to men’s mental health since the onset of Covid-19 in Kenya last year.

The pandemic had many men lose their jobs, businesses and even have to sell off their valuable assets in order for them and their families to survive

Traditionally men have been looked upon as the financial providers and the heads of households.

This kind of conditioning in people’s minds, has seen many men left to shoulder financial burdens even when they do not have any source of income and are at their breaking points mentally.

Because of societal stigma towards men showing or even speaking about their distressing emotions, men have had to keep going even when they are at their wits end.

It is because of this kind of stigma as well as societal expectations that even when a man has a spouse who is fully capable of handling financial matters, the expectation would be that he has to go out there and do what “other men “do in order to put food on the table.

This kind of pressure has not only contributed to men suffering mental illnesses like anxiety and depression in silence but has also led to strained relationships, and dysfunctional families.

Dysfunctional families can be a risk factor for various mental health challenges in children such as psychological trauma which can lead to psychological, emotional, and even behavioural problems not only when they are young but also later in life.

Diminished income due to Covid-19 has further perpetuated emotional issues among men such as of low self-esteem and questions of self-worth as well as feelings of shame.

The shame is not only limited to how the society views them when they don’t have an income but also how their dependents view them.

Most men derive their sense of identity from the ability to provide. When this is taken away, they start to question not only their identity as men but even their worth.

Now picture this; John, a 28-year-old married man working in one of the public hospitals in Nairobi, shares his experience having lost his job last year at the height of the pandemic.

Despite being highly qualified with a Bachelor’s degree in economics as well as being a chartered accountant, he found himself jobless with no alternative source of income.

John says not having an income was the most difficult part for him compared to being forced to stay at home.

Despite the fact that his wife was comfortably providing for their five-year-old daughter, John shares that he felt inadequate as a man and felt embarrassed that the wife had to take up his responsibility.

It is important for the society to understand that men are also human and that they suffer the same mental and emotional anguish as their female counter parts; they are not immune to distressful emotions that come from the adverse events in life such Covid-19.

The only difference is that they are expected “to man up” and do what it takes to keep going without expressing their emotions or even reaching out for help.

This perhaps explains why the suicide prevalence among men 3 times is more compared to that of women (WHO 2016).

In comparison, Covid containment measures have also affected men although to a lesser degree compared to diminished income.

Unlike women who can spend hours talking on the phone and “catching up” without necessarily having to meet in person, men prefer to socialize in person with their peers over a game of sports or a drink.

These restrictions led to feelings of being constrained and reduced social connections. Most men bond with their peers not necessarily through discussing emotional issues but rather just by being in each other’s company; watching sports or taking part in mutually enjoyed activities.

This provides them with emotional catharsis especially when going through difficult times. This catharsis is important in reducing pent up and distressing feelings. Perhaps this pent up frustration from “cabin fever” may explain why even at the height of the lockdown period last year, many men, would flock to social places at the slightest opportunity regardless of the legal consequences.

These Covid containment measures including lockdowns, perpetuated mental health issues in men such as anxiety and depression.

Additionally, the limitations in human interactions as well as other containment measures such as the emphasis on sanitizing and use of masks, perpetuated, and even might have been a trigger for some anxiety disorders such as social anxiety and in other cases obsessive compulsive disorder (OCD) which is characterized by obsessive thoughts and compulsive behaviours.

In order to cope with the diminished income and covid containment measures as well as the mental health conditions that ensued thereafter (or were exacerbated) some men resorted to alcohol and substance use.

This further perpetuated already existing problems including such as guilt, low self-esteem, disconnect in relationships and even further loss of income not to mention physical illnesses such as cirrhosis of the liver, Wernicke-Korsakoff syndrome (WKS), cardiovascular diseases among other illnesses that are a result of alcohol use disorder.

It is important for men to seek professional services when it comes to managing their mental health. Several healthcare facilities in Kenya offer mental health services.

It is important to seek the services from professionally qualified practitioners i.e., Psychologists or Psychiatrists.

Behavioural changes to look out for include, spending more time than usual in certain activities such as work, for, the onset of or worsening of alcohol/ substance use, engaging in risk taking behaviour like unsafe sex, or other addictive behaviours like gambling, avoiding social events, having suicidal thoughts or even attempting suicide.

Emotional signs include irritability, anger, and aggressive behaviours. Physical signs include insomnia or hypersomnia, increased or reduced appetite, headaches, digestive problems among others.

Unlike women who are open about expressing their emotions either through talking or crying, men tend to internalize their problems and not reach out for any kind of help.

Internalizing of problems by men is usually due to societal stigma which frowns upon men showing any signs of emotional distress as this is usually seen as a sign of weakness or lack of masculinity.

This was of coping can lead to certain types of anxiety disorders such as somatoform disorder which is characterized by “physical ailments” which have got no medical basis or evidence.

Furthermore because of the stigma, many men don’t seek any kind of help (including professional help) and therefore go undiagnosed with depression.

Some of the signs to look out for including feelings of hopelessness, loss of interest in previously enjoyed activities, unrelenting feelings of sadness, among others.

A study by the World health organization (2016) revealed that the prevalence of suicide is 3 times higher among men compared to that of women.

This could perhaps be explained by the fact that fewer men compared to women reach out for help when going through a crisis. It is important to note that depression is the biggest risk factor for suicide.

There are several interventions that the authority and the society can do for men suffering mental health.

First and foremost, it is critical to creating public awareness regarding the risk of men suffering from mental health conditions especially because of the stigma associated with men seeking help for emotional problems.

Therefore it is important that the society normalizes (destigmatize) seeking of help by men who might be suffering from depression or other mental health conditions.

The authority should also look into developing policies and creating incentives that will encourage men to seek assistance for mental health service.

Incentives could include subsidized medical covers providing mental health services for men. It is important also for medical insurance companies not to put restrictions on clients seeking professional interventions on drugs and substance abuse.

Needless to say, our society has come a long way in addressing men‘s psychological and emotional wellbeing.

For example some churches offer mentorship services for men of all groups which cater not only for their spiritual but also emotional and psychological needs.

However more could be done to address the challenges that men face in regard to mental health.

At the individual level men need to understand that it is okay not to be okay and that they don’t have to have it all together or to have it all figured out; they are only human.

As individuals we should strive to recondition our minds not to look down upon men who express their emotions through crying or even sharing their emotional and psychological difficulties.

The family being a primary support system should be the first place that men feel safe enough to turn to when going through difficulties This will allow them to open up without the fear of being judged as emotionally weak.

Communities such as churches, workplaces, and even sports groups should have platforms or groups where men can open up to each other about the challenges they face through either through peer support groups or even team building activities specifically for men.

This will act as an incentive for men to seek professional help for their mental health. Last but not least, while working towards destigmatizing seeking of mental health services by men, the authorities can put in place other services such as toll free helplines so as to encourage more men to seek professional. Professional helplines go a step further in protecting the identity of the callers.

The Future of Africa in the Post COVID-19 World

Construction of recreational park in Embakasi set to begin

CEO AFRICA - September 6, 2018 1
Jubilee and Nasa MCAs unanimously teamed up to impeach Speaker Beatrice Elachi whom they accused of abuse of office and sabotage of assembly operations.The...