The eighth edition of the Africa Magic Viewers’ Choice Awards (AMVCAs) came to a rousing end on Saturday, 14 May 2022, with winners announced on the biggest and most glamorous night to celebrate African film and TV talent.

The MTF East African Academy once again lit up the stage for a win at the AMVCAs which took place this past weekend in Lagos, Nigeria.

Daisy Masembe, an MTF alumni of the East African Academy won in the Best MultiChoice Talent Factory Film Category for the short-film ‘Engaito’. 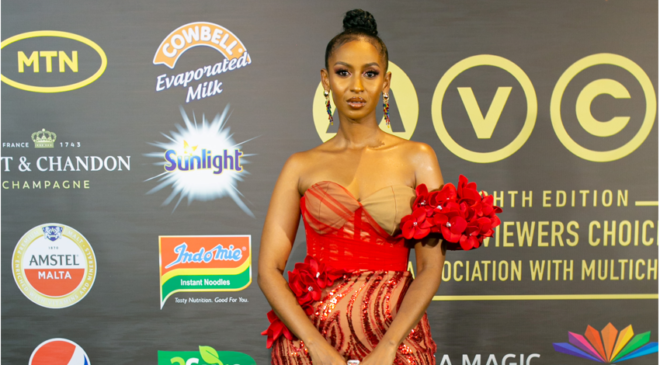 Engaito is a 10-minute Ugandan comedy short film produced by Masembe Daisy and directed by Pius Talemwa and Isiko Abubaker, all of the 2021 MTF cohort.  Engaito premiered on Showmax on the 25th of May 2021 under the “Colors of Africa” theme.

It follows an uptown kid who joins a local school in a very deep village where shoes are considered as a bad omen. It stars Sekajja Maurice, Nampuma Henry, Akello Esther and Zzizinga Dickson in a supporting role.

Engaito made its festival run in the same year of its release where it was nominated in the Uganda Film Festival Awards (UFF), the Kalasha International TV and Film Awards (Nairobi, Kenya) and the Janzi Awards respectively.

Daisy Mazembe was top of the 2021 class and the beneficiary of the MTF top award of an internship to the prestigious New York Film Academy.

In the special recognition categories, the AMVCA industry Merit award for this edition was given to veteran Nigerian actress, journalist and television presenter, Taiwo Ajai-Lycett (OON) whilst the Trailblazer award, an award given to an outstanding achievement by a young and upcoming act, went to Teni Aladese.

The eighth edition of the Africa Magic Viewers’ Choice Awards is brought by Africa Magic in association with MultiChoice and is proudly sponsored by Amstel Malta.

See the full list of winners below and visit www.africamagic.tv/AMVCA for more news and highlights of the night.