Naivas Supermarket has opened its 74th branch in Githurai 44 as it strives to achieve its 80 outlets target this financial year.

The Githurai outlet was opened today as Naivas seeks to strengthen its hold as a top retailer in the country.

Situated on Kamiti road, the branch will be targeting hundreds of shoppers around the region.

The now leading local retailer has over the last few months been on an aggressive expansion plan.

According to Willy Kimani the retailers Chief Commercial Officer the new Githurai outlet is the 74th store countrywide with other three expected to be opened within the next three weeks.

“This Friday we will be opening another store in Kisumu and next week the 76th store will be opened in Embakasi. We will not emulate the other stores and we are treading carefully even as we open other branches,” said Kimani

The CCO maintains that they will not hesitate to shut down any branches that are not profitable. 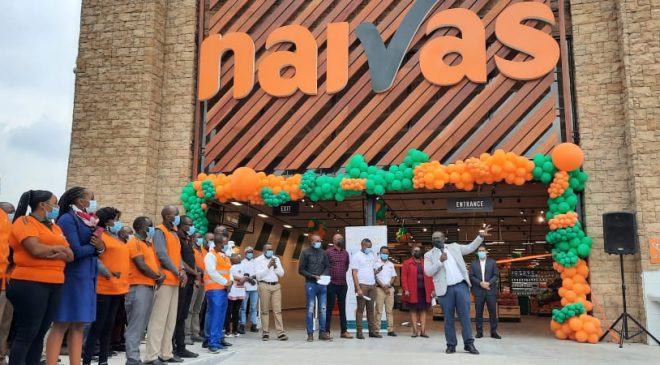 The retailer is eyeing to reach 80 stores this financial year with Kisumu store set to be opened at Simba Club Hall next to United Mall this Friday, Two branches are also  set to be opened in Embakasi, One in Juja, one along Mombasa Road and two more in a yet to be disclosed location.

The Kisumu branch comes a few months after Tuskys ceased operations at the area on dwindling cash flows.