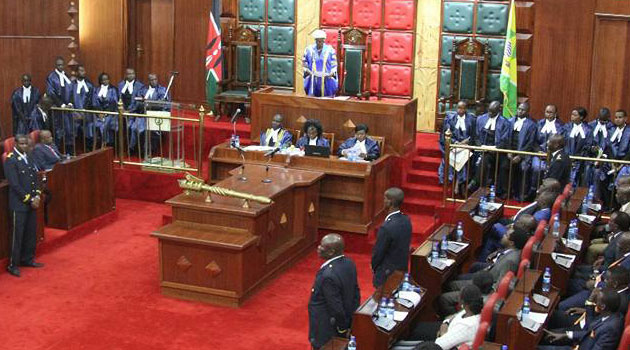 Jubilee and Nasa MCAs unanimously teamed up to impeach Speaker Beatrice Elachi whom they accused of abuse of office and sabotage of assembly operations.

The ward reps had to vote to secure her removal from office, with 103 voting in favor of the motion and only two coming to Elach’s defense.

To push through the motion, they had to amend several sections of the standing order to shorten the impeachment process of the assembly speaker.

They accused Elachi for quoting in excess of Sh25 million in the purchase of the speakers residence which was valued at Sh100 million.

They claim that Elachi interfered, influenced and even threatened staff to award the tender to her close relative. This, they said, amounts to conflict of interest and violation of chapter six of the constitution on responsibilities of leadership.

They also claim that the speaker, sabotaged, undermined and unilaterally undertook the functions of the County Assembly Service Board contrary to section 12 of the county governments act.

The legislators claim that the speaker invited DCI officers to probe the officers of the county assembly without the approval of the assembly leadership.

According to the MCAs, the speaker unilaterally appointed accounting officers without consulting the board.

“The speaker unilaterally, in proce and illegally unsupping the functions of the board thereby purpoting to take cerytain actions which can only emanate from the board,”

They are further accusing Elachi for spending a staggering taxpayers money amounting to 550,000 to travel to Dubai to be awarded a honorary degree by the London Graduate School.

They claim the degree was fake and was a ploy by some Nigerian fraudsters commonly known as 419 scams. They claim that a renowned Journalist and an activist have in the past publicly put in the social media pages that they had been invited by the University to pay for the Degrees.

Still on the use of public resources, they claim that Elachi spent taxpayers money on ‘dubious’ travel to Dalas in US ostensibly for Diaspora Women Network Conference when in actual sense she was traveling for plastic surgery and Knee surgery.

This, according to them was captured by the CIC insurance in their claim for Sh1million.

A ccording to the standing orders,the removal of the speaker starts with notice of motion, which if adopted an ad hoc committee is formed to investigate the speaker.

The committee, if satisfied with the grounds of the removal should give the assembly a go ahead to debate such a motion.

The MCAs however, seemingly aware of the requirements, amended all the clauses deterring the impeachment process to go on on the very day of issuing the notice of motion. https://www.ceoafrica.co.ke/

Youths,women to be given priority in City Hall jobs

Jacktone Lawi - August 11, 2021 0
Gikomba market, it’s always a beehive of activities on daily basis, but If you mention Cathy Muringo, everyone will direct you to where she...

Surge of the digital travel consumer