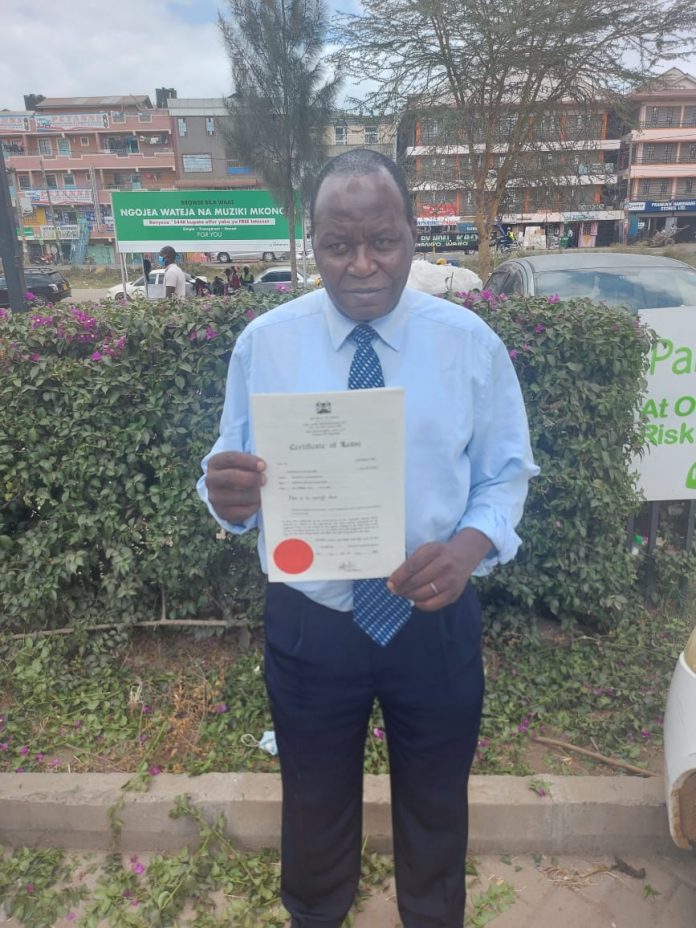 After two years of fighting, a Senior NIS officer  Francis Nyangure was finally handed over his plot Title Deed against the wishes of land cartels who have been claiming ownership of the plot located in Nairobi’s Utawala area.

It took the intervention of the Principal Secretary Ministry of Lands Dr.Muraguri for the officer to succesfully get the title of the plot which is rated at Sh44.5 million.

The land has been at the centre of controversy at some point in August 2020 the matter attracted the attention of President Uhuru who according to the officer, ordered that the ministry formalises everything for the officer to be given the title.

But rven after intervention in the saga by Head of State, land cartels working behind the scenes and with the help of insiders in the Ministry and Survey of Kenya had already issued out a title to the fraudsters which now has to be degazzeted.

Times has since 4established that the fraudsters ring is well connected right from the Embakasi Ranching Company, Survey of Kenya and the Ministry itself with four key members in the latter two, who have wrecked in millions through fraud.

DIB strengthens digital banking solutions with the introduction of Pesalink

Why you need a Toyota Starlet this Valentines.

KRA to collect KShs.22.9 million tax from a Nanyuki restaurant

CEO AFRICA - August 17, 2021 0
A Nanyuki based restaurant is set to pay KShs.22.9 million tax to the Kenya Revenue Authority (KRA) after it lost a tax appeal at the Tax Appeals Tribunal. Le Restique Limited (the taxpayer) was contesting KRA’s demand for payment of KShs 22,908,175.49.  The taxpayer was disputing that KRA’s tax assessments were defective because KRA did not make an objection decision within the required timelines from the date the taxpayer lodged a notice of objection.  The taxpayer also argued that KRA had issued assessments based on arbitrary assumptions which were not in accordance with the provisions of the law. KRA in its defence argued that it was justified in arriving at the assessment on the basis of estimations based on information and documents outside the self- assessment and financial statements.  The main reason provided for relying on this method was that the Appellant had failed to provide sufficient documentation to support the actual amounts that were stated in the self- assessment. The Tribunal’s in judgement dismissed the Appeal and held that the taxpayer did not discharge the burden of proof that the tax decision by KRA was incorrect.  The Tribunal arrived at this decision after it failed to find any evidence of the taxpayer supplying the other documents or providing a response to KRA’s request for documents despite the taxpayer asserting that the documents had been filed with the Tribunal.