Barely a month after the launch of realme C11 into the Kenyan market. Realme brand is releasing another brand realmeC15 the battery monster.

The handset has a large 6,000mAh battery and offers up to 64GB of storage, quad rear cameras, and a physical fingerprint scanner.

What I got inside the box 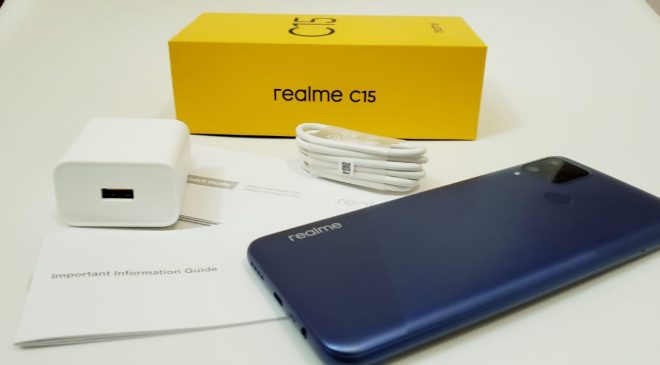 Inside the box, you have the usual items: the phone itself, SIM ejector tool, documentation, MicroUSB cable, 18w wall charger.

The realme C15 is equipped with a MediaTek Helio G35 CPU paired with a PowerVR GE8320 GPU, 4GB of RAM, and 64GB of storage. When it comes to day-to-day tasks like browsing the web and navigating around social media, the C15 provided a smooth experience.

One thing I immediately noticed when I unboxed the C15 is that it is was thick and heavy. That is partly because it packs a 6000mAh battery, which is the biggest I have seen in  smartphone released in recently.

I personally don’t mind the extra weight as it translates to better endurance for day to day use, but like anything design-related,mileage may vary.

The Realme C15 is similar to the Realme C11 in terms of design. There’s a waterdrop display at the front and a plastic rear panel with a pattern finish, a physical fingerprint sensor, and a square-shaped camera module on the corner. The Realme C15 is a chunky phone with a good amount of heft and thickness due to the massive battery  inside. This makes it difficult to use the phone with one hand for a long period of time.

Key differentiators between the C11 and C15 include the latter’s rear-mounted fingerprint scanner and camera module housing four rear cameras, placing the LED flash outside of the module.

Because of the phone’s thickness, the camera module sits flush, so you don’t have to worry about the phone wobbling when you place it flat on the table.

Unlike the C11, the C15 has a textured back with Realme’s more familiar geometric design.

Like the C11, you get the same button and port layout on the C15: SIM card tray on the left side, power and volume controls on the right side, and headphone jack. MicroUSB port, and loudspeaker at the bottom.

We’re bummed to see the C15 have an aging MicroUSB port, especially with some of the competition already shifting to USB-C.

The reliable fingerprint sensor can unlock your phone instantly. In addition, the convenient face unlock is also supported.

Like the C11, you get the same, large 6.5-inch HD+ IPS display on the C15. The only difference here is that the C15’s waterdrop notch houses a slightly better 8-megapixel selfie snapper.

The C15’s HD+ resolution is good for day-to-day use, though it struggles with outdoor use. As for colors, the C15’s display is pretty spot-on as far as accuracy is concerned.

With the C15, you get two additional cameras in the form of an 8-megapixel f/2.25 ultra-wide-angle camera and a 2-megapixel f/2.4 mono camera.

The ultra-wide-angle camera gives an added shooting option to the C15, while the mono camera helps in improving overall image processing.

The C15 addressed the problems we encountered with the C11: shutter lag is no longer an issue, and autofocus is more responsive.

Regardless if you use the main camera or ultra-wide-angle camera, both snappers delivered consistent image quality and accurate white balance. When pixel-peeping images, Realme’s post-processing does a fair amount of sharpening to make the photos as detailed as possible without looking too artificial.

Quad-Rear Camera With 1080p Video Recording the Realme C15 is a budget smartphone, yet the company has packed it with four cameras on the back panel. The setup comprises a 13MP primary sensor with an f/2.2 aperture accompanied by an 8MP ultra-wide-angle sensor and a pair of 2MP sensors with an f/2.4 aperture. The rear camera is capable of capturing 4x zoom and record 1080p@30fps videos. It also has a dedicated nightscape mode for low-light shots.

The Realme C15 is a powerful budget-friendly phone designed for gamers and camera lovers. It is a high-performing device powered by MediaTek Helio G35 gaming processor.

It has a large screen display and a huge battery capacity of 6000mAh. C15 has an excellent performance with long battery life, smooth gaming graphics and amazing camera  it is the best budget phone for gamers and students who are enrolled in online class.