The scramble to control Nairobi County which is facing an almost incurable leadership crisis has begun, with leaders giving several suggestions on the way forward for the capital City.

Nairobi, which controls over 60% of the country’s GDP, was thrown into a leadership crisis following the arrest of governor Mike Sonko in December last year.

The Director of Public Prosecutions ordered for the arrest of the flamboyant governor for alleged embezzlement of public funds. Sonko was consequently barred from accessing office, triggering a big leadership crisis that has been made worse by the fact that he has been operating without a deputy.

The confusion that has been sparked has seen services paralysed at City Hall, suppliers seeking help from the state over their pending bills left in limbo even as the country’s top leadership remains silent over the same.

Constitutionally, Sonko remains the de facto governor, pending the hearing and determination of his case. However, the fact that he has no deputy makes things complex for him, even as he seeks to remain in charge of affairs at City Hall.

Leaders in the county are now mauling over options that can see the county fully functional, but it has now emerged that some are scheming ways through which they can have influence at City.

On Thursday, a section of leaders called on President Uhuru to begin the process of dissolving the county to pave way for the election on a new governor.

The leaders under the banner Nairobi County Leaders Caucus, want President Uhuru to set up   a commission of inquiry as is provided for in the Constitution under article 192 and section 124 of the County Government Act.

They are led by former Dagoreti South MP Dennis Waweru and former City Hall Education Executive Janet Ouko who have advised that dissolving the county is the only way out.

“Serious steps must be taken as because Nairobi County yearns for true and strategic leadership now more than ever before. We are calling for the President to quickly move in to save Nairobi by taking decisive action,” said Ms Ouko.

But the presence of Waweru, has triggered yet another debate on the corridors of power in the city, with observers stating that he is representing views by 2017 gubernatorial candidates who were floored by Sonko in the Jubilee party primaries.

Waweru said Uhuru holds key to the solutions at City Hall, underlining the need for him to intervene

“We need leadership in Nairobi that can be strategic enough, inclusive and forward looking which I do not think we have at the moment,” said Mr Waweru.

Waweru has lately been close to nominated MP Maina Kamanda, Senator Johnson Sakaja and other Nairobi leaders opposed to the leadership of governor Sonko. 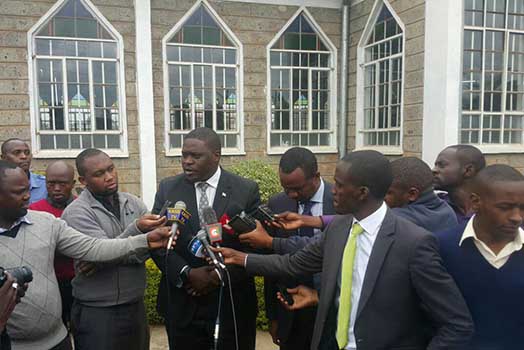 Early last week, Sakaja held a meeting with matatu owners from Mwiki in Kasarani Sub County together with key officials from KURA to forestall demonstrations over the poor state of roads in the area. This appeared as a smart way by the senator to send a message to state operatives that he can offer an alternative if called upon.

The Building Bridges Initiative by President Uhuru Kenyatta appears to be another avenue leaders are exploring, with speculations rife that a proposal to have Nairobi completely managed by the national government being dangled to the taskforce spearheading the reform exercise.

In the BBI report released at the Bomas of Kenya, the taskforce had proposed that management of ‘some’ functions be taken from City Hall to the national government.

The proposal does not seem   to ogre well with majority of the leaders from across the political divide, with some arguing that the national government has its fair share of problems and that such a move will not guarantee improved service delivery.

Nairobi leaders who are actively involved in campaigning for the BBI report are senator Sakaja, MPs George Aladwa, Simba Arati,Tim Wanyonyi speaker Beatrice Elachi and majority of the MCAs.

It’s not clear whether they have issued their memorandum to the taskorce but it’s believed one will be presented when the BBI meeting is held in the capital on February 26th.

“ The governor is in court and has not been declared guilty so such a decision will be harsh to him and those who elected him but what is important is finding a way we can have service delivery restored,”

The revival of the Nairobi Regeneration Team is what has been deemed as the ultimate doable option for Nairobi.

Nairobi MCAs held a special meeting where they agreed that the team be revived to help the executive in its operations.

Speaker Beatrice Elachi directed that it will be important to revive the regeneration team which can still legally help in averting the leadership crisis.

Despite being barred from accessing office, Sonko has put up a spirited fight to remain in charge of daily operations at City Hall.

On January 6th, he nominated Ms Ann Mwenda for the position of the Deputy Governor, attracting protests from the DPP who says that he was violating his bail terms.

The governor appears to have won over the hearts of Jubilee MCAs and a section of their counterparts from ODM in efforts to have the name approved.

The MCAS held another special sitting on Wednesday,wher they agreed that the name being taken through the necessary process for approval on the floor of the house.

Speaker Beatrice Elachi ruled that Ms Mwenda’s name be committed to the Appointments Committee for vetting.

“I hereby commit the name of Ann Mwenda to the select committee on Appointments for consideration,” Ms Elachi ruled.

Elachi further stated calcified that Sonko is still the governor of Nairobi and that she has no intentions or plans to take over on interim basis.

Sonko further got a major boost the same day when the High Court declined to issue orders barring the Nairobi County Assembly from vetting the DG nominee.

In the case, Peter Adhiambo Agoro moved to court to temporarily bar Ms. Mwenda’s vetting and also order Sonko not to nominate any other person pending the hearing and determination of his fraud case.

The court directed that the inter party hearing on the matter take place on February 17.

Plans to impeach the governor seem to have lost momentum after the MCAs agreed to have the name of the Deputy Governor nominee brought to the assembly for approval.

It is however understood that the MCAs are still waiting for directions from their parties, which have remained silent over the leadership crisis at the county.

The governor is also believed to have made truce with some of the MCAs who he had fallen out with but it’s not clear whether he is in talking terms with former majority leader Abdi Guyo.