Front Line Defenders has released the findings of a 4-year investigation into targeted violence, threats, and attacks against sex worker rights defenders – the first-ever global report documenting violence against sex workers who advocate for their communities’ rights.

Front Line Defenders interviewed more than 350 sex workers in 20 countries about the violent, targeted attacks faced by those who protect others.

The report found cases of arrest; sexual assault in detention; raids on their homes and offices; immense psychological pressure; threats from managers, family, and clients; physical attacks; police surveillance while conducting health outreach work; public defamation campaigns; extreme financial burdens because of activism; and discriminatory exclusion from policymaking in areas in which they have clear, demonstrable, and unmatched expertise.

According to Dohty Ogutu the report found cases of arrest; sexual assault in detention; raids on their homes and offices; immense psychological pressure; threats from managers, family, and clients; physical attacks; police surveillance while conducting health outreach work; public defamation campaigns; extreme financial burdens as a result of activism; and discriminatory exclusion from policy making in areas in which they have clear, demonstrable and unmatched expertise. 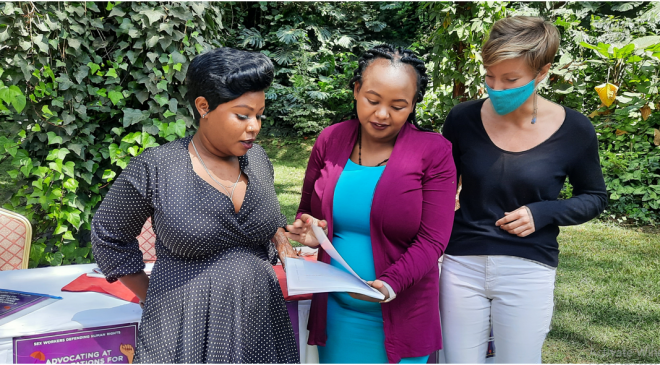 “The report was sampled in Tanzania, Kyrgyzstan, Myanmar and El Salvador, Front Line Defenders researchers spoke with hundreds of defenders and communities members about the risks, threats and protection needs of sex workers who become visible advocates for human rights. The report finds that a large majority of violence perpetrated against these HRDs is demonstrably in retaliation for their activism.” said Grace Kamau a sex worker.

The Front Line Defenders report documents a range of strategies and tactics SWRDs use to protect their communities (before discussing the types of attacks they face for doing so). The report features cases, stories and testimonies which transcend narratives of a victimised, sexualised population employing ad hoc survival tactics, and explores a broader, more nuanced collection of strategic, creative, methodical and intersectional systems of protection designed and deployed by HRDs.

The vast majority felt that a report on the specific risks faced by leaders of their communities, produced by what they perceived as one of the leading HRD protection organisations, could significantly impact access to HRD services, protection, funding, trainings, and in general to support existing efforts to validate the human rights work of sex worker rights defenders as a legitimate strand of human rights work amongst broader human rights and HRD networks.

Defenders explained that while hundreds of studies detail attacks against sex workers in general, and several academic studies have explored various aspects of sex worker organizing, no publicly available documentation had examined, in an in-depth, intentional, and global manner, the risks facing sex workers who dare to advocate for their communities.

It is critical to note that the collective protection strategies and tactics of sex workers have been well documented by sex worker communities themselves. They appear in this report – in the framework of human rights defenders – to contextualize the documentation of risks and threats that HRDs face as a direct result of such human rights work. Additionally, SWRDs consulted for this report explicitly requested that Front Line Defenders document and structure the report in this way, to push back on the frequent devaluation of their human rights work.

The report also documents the ways in which the human rights activities of these HRDs benefit not only people who identify as sex workers, but also those who were forced, compelled or trafficked into selling sex unwillingly. This includes life-saving human rights activities such as: negotiating access to brothels, trainings on how to access justice mechanisms and report experiences of violence, identifying medical needs, harm reduction, building connections and trust with establishment managers, emergency response, and advocacy for freedom of movement and free choice of employment for those seeking to leave sex work.

“Sex worker rights defenders are at risk because they are defending the basic human rights of communities that are amongst the most marginalised in every society. And that means they must be an integral part of our core work.”
– Andrew Anderson, Executive Director, Front Line Defenders in the report

Why Sex Worker Rights, Why Front Line Defenders, Why This Report?

In 2017, Front Line Defenders identified a gap in organisational knowledge, and in the human rights defender field more broadly, on how to best support and protect sex worker rights defenders, who operate at the intersection of multiple economically and politically marginalised identities.

The organisation embarked on process of internal learning which included consultations with multiple SWRD networks to identify gaps in organisational knowledge vis-a-vis the human rights work, risks, and specific protection needs of SWRDs at risk. While this process was originally conceptualised of as an internal learning endeavour related to the organisation’s campaigning, grant making, trainings, digital security support, and other protection programs for HRDs, sex worker rights defenders consulted during this period requested that FLD make the findings of these consultations public.

OPINION:Coronavirus has stress-tested our food systems, and many are set to...

Jacktone Lawi - May 3, 2021 0
The Lapaire Group is on a quest to solve the rising crisis, with over 26.3 million people in Africa estimated to have a form...