Nairobi Governor Mike Sonko will next month roll out a Youth Development Program that will see at least 20,000 youths directly involved in various community based activities.

The governor on Friday announced that the department of Youths and Education is working with various stakeholders to finalize on modalities through which the county government will fund all youth’s related activities.

Among the plans the county has is to introduce the Youth Talent Development Bill that will allow the county to fund artistes, sporting activities and community based youth initiatives.

“The county government realizes the need to roll out more programs that will not only keep our young men active, but also help them earn a decent living,” 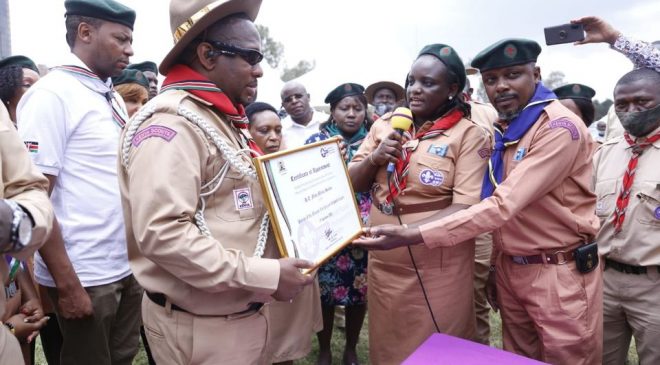 To start off, the governor announced that he will be distributing 500,000 sanitary towels in all the 85 wards.

The distribution will be done by the scouting association to mark the beginning of the new partnership program.

The governor said this at Railways Club Nairobi where he was installed as the official patron of the Kenya Scouts Association, Nairobi chapter. He was officially handed the mantle by Wiper Party leader Kalonzo Musyoka.

Kalonzo called on the governor and Nairobi to champion the rights of scouts to greater heights and carry with him the attributes of the founders of scouting in the world.

“It now upon you to show high integrity levels and in your leadership because scouts worldwide are people of respect,”

Some 25 MCAs were also initiated to the scouts association in a larger plan to help streamline scouting activities at ward level.