Basketball fans in Kenya will be served with a rich lineup of the game following the acquisition of the FIBA EuroBasket 2022 broadcast rights by pay television company StarTimes Media. The tournament will be star-studded as ever with the biggest names in basketball set to step out in Europe’s flagship event.

The FIBA EuroBasket 2022 will take place from 1st to 18th September where the broadcaster will air live the entire tournament on Sports Premium, Sports Life and Sports Focus channel. The tournament will see Europe’s top 24 nations get together for the first time in five years this having been the longest break in EuroBasket history.

The tournament had previously been staged every two years but was moved to a four-year cycle starting with the 2017 tournament. The postponement of the Tokyo Olympics to 2021 forced the tournament to be moved to 2022.

Speaking while he unveiled the tournament, StarTimes Regional Marketing Director Mr. Aldrine Nsubuga singled out the continental event as one of the most competitive basketball tournaments in the world as each of the top European nations seeks to concur equally high flying opponents to be crowned the champions of Europe. 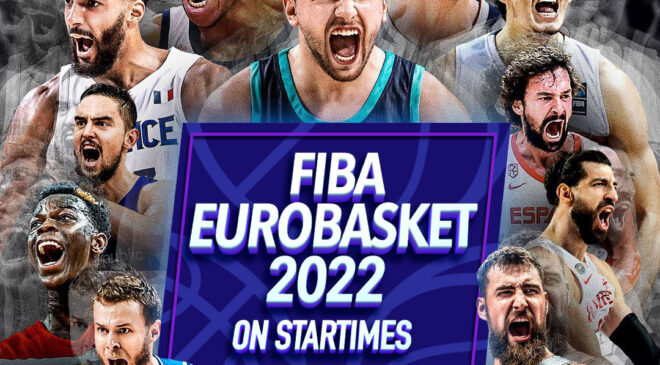 Other top contenders include Greece, led by Giannis Antetokounmpo and his brothers Thanasis and Kostas and a France team that features three-time Defensive Player of the Year Rudy Gobert.

With many of the teams at the FIBA EuroBasket 2022 kicking off their campaigns fresh from playing in the 2023 FIBA Basketball World Cup qualifiers, the squads are expected to be fit heading into the highly anticipated tournament.

The group phase of EuroBasket 2022 will run from 1st to 9th September with six teams in each of the four pools. The top four teams at the end of the round-robin phase will then advance to the first knockout phase, the round of 16.

The eight winning teams will then compete in the quarter-finals slated for 13th to 14th September with the semi-finals set for 16th September and the gold-medal game being played on 18th September in Berlin.