Governments are supposed to ensure clean water for swimming, fishing, cooking, bathing, washing, irrigation, drinking among others. Unfortunately, after more decades of regulations, waterways are in serious jeopardy.

Not only are groundwater aquifers rapidly depleting, but much of the world’s water supply has become too contaminated to drink or bathe in. According to the World Health Organization (WHO), nearly two billion people don’t have safe drinking water. 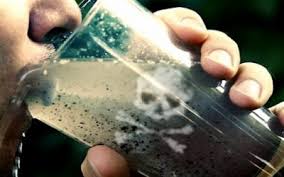 Forced to drink contaminated water, hundreds of thousands of people die from preventable diseases each year. Not only a problem for developing countries: water across the world is contaminated with pollutants that treatment plants are not prepared to filter.

Pollution is not only affecting the health of humans, but also plants and animals on which we depend for our food supply. For example, the South Asian water basin should supply water to more than 750 million people, but the water is not even usable for irrigation due to arsenic contamination and excess salt.

Factory farms are undoubtedly the greatest contributor to water pollution in the world posing multiple threats to humans, plants and wildlife. Aquatic creatures are dying at higher than normal rates, and are born disfigured. Frogs with six legs or male fish that lay eggs are just two examples.

A recent U.S. Geological Survey found an alarming number of white sucker fish with prominent cancer tumors in several of Lake Michigan’s tributaries. These fish are bottom feeders, eating from the sediment on the river bottom and their health is an indication of how quickly the environment is degrading.

As fish are succumbing to cancer due to toxins in the environment, it is no great surprise that cancer has become one of the leading causes of death in humans, who are at the top of the food chain.

Ultimately, water pollution threatens the health of all who touch it, and the effects seen on wildlife may be a preview of what can be expected in humans.

In an attempt to address the world water pollution problem, the U.N. General Assembly adopted its Sustainable Development Goals in 2015. There are a series of targets countries may use to eradicate poverty and improve living conditions, including affordable water and sanitation, by 2030.

However, according to WHO, many countries may significantly fall short of this goal without a radical increase in their community investments.

The most recent WHO report acknowledged that countries had raised annual budgets for hygiene, water and sanitation an average of 4.9 percent in the past three years, yet that may not be enough.

“Today, almost 2 billion people use a source of drinking water contaminated with feces, putting them at risk of contracting cholera, dysentery, typhoid and polio.

Contaminated drinking water is estimated to cause more than 500,000 diarrheal deaths each year and is a major factor in several neglected tropical diseases, including intestinal worms, schistosomiasis and trachoma,” quoted from WHO report.

According to the U.N. Sustainable Development Goals, since 1990 2.6 billion people have gained access to clean water sources, but nearly 663 million are still without access.6

And, more than 80 percent of wastewater contaminated by human waste is discharged into rivers and oceans without any pollution removal. This may be purposefully or as the result of treatment plant failure.

High levels of phosphorus and nitrogen in the water, from farm fertilization runoff, triggers algae growth, choking out oxygen in the water hence creating a toxic waste area.

Unlike volumes of information available on the health effects of pathogens, the science on long-term exposure to small amounts of a chemical soup mixture of pharmaceuticals is still in its infancy. Research recently released in Environmental Science and Technology found evidence of complex blends of organic pollutants in many different water sources including streams.

Hexavalent chromium also known as Chromium-6 does occur naturally in the environment, but large amounts are also produced during manufacturing of industrial projects, requiring costly disposal.

Even in small amounts, this metal can cause birth defects, stomach cancer, skin burns and pneumonia. Even though it is classified as a carcinogen, there are no civic standards set for maximum exposure.

“Houston, we have a problem. More than 20 years ago, we learned that this dangerous chemical poisoned the tap water of California communities, and now these tests and EWG’s report show that roughly 218 million Americans are being served drinking water polluted with potentially dangerous levels of this known carcinogen.

But in that time the EPA hasn’t set drinking water standards for any previously unregulated contaminant, and there are disturbing signs the agency may again do nothing about chromium-6. This is an abject failure by the EPA, including members of Congress charged with overseeing the agency, and every American should be outraged by this inaction,” quoting from an American lobby group report on the same Chromium-6 effects on water.

While more than half the world is drinking water contaminated by pollution; whether animal or human waste, agricultural runoff or pharmaceutical products: proposed government regulations would likely loosen standards and drive water and environmental pollution to even higher levels.

In a recent sample of water taken from streams that feed Nairobi River, researchers found 63 percent had at least one neonicotinoid, a class of insecticide. More concerning were samples from local tap water and from water released at the treatment plant which had three main neonicotinoids, demonstrating filtration was not effective.

Moving forward, the risk of water pollution may only increase as past environmental protection regulations are rolled back under the new government administration.

The Stream Protection Rule required mining companies to restore mined areas to their previous condition. Companies complained it was too expensive. It was just one of the campaign promises that came to fruition after the presidential election, likely to create more damage to the environment.

“I don’t know why they’ve decided that our core values no longer include clean air and clean water. But that seems to be what this is about. It’s executive orders that are threatening the safety of our drinking water for 45 million plus Kenyans.”

The changes to environmental policy of this administration make it highly likely water pollution, affecting both the health of the environment and the people drinking it, will only increase, triggering far more damage in the coming years than can reasonably be anticipated now.

Water pollution and filtration in countries where people are forced to gather water from streams and wells increase the risk these sources are polluted with feces and other pathogenic contaminants. Water pollution in these areas often trigger diarrhea, which is a leading cause of death for children under the age of 5.

Simple, locally manufactured, ceramic filters, used for household filtering in developing countries, have been shown to reduce the number of children and adults suffering from pathogenic water contamination. The most widely implemented design is from a mission-based organization, Potters for Peace.

Using clay pots for filtration has several advantages and disadvantages: on the upside, the pots have proven to reduce the levels of bacteria and protozoa in the water. They are simple to use and have a long life if the filter remains unbroken. However, this type of filtration is not effective against viruses, may break over time and has a low flow rate, filtering between 1 and 3 liters per hour if the water is clear. If cloudy with sediment, the receptacles must be cleaned after each use.

Although clay pots are an effective means of primary filtration when water treatment is unavailable, additional home filtration is often necessary, even when tap water is delivered to your home from wastewater treatment plants.

Also many drugs and chemicals pass through water treatment plants, ending up in your home.  It will require a global scale change to stop water pollution that is taking a heavy toll on health and the environment. But, in the meantime, you can make changes at home to protect yourself and your family.

It is best to adopt the idea that your tap water is less than pure. One of the most comprehensive water testing kits I recommend is from National Testing Laboratories. To ensure you drink and bathe in the least contaminated water possible, it is best to filter at the point of entry to your home and at the point of use, such as your sink or shower.

Unfiltered water also exposes you to chlorine vapors, used to treat the water supply. The Kenya Food and Drug Administration and other governmental agencies report most homes have measurable levels of chloroform gas, courtesy of chlorine treated water. If you can afford only one filter, it is best to place one on your shower head, as you inhale aerosolized chlorine in the shower and absorb it through your skin. You can actually absorb three times more chemicals from showering or bathing than from oral intake.

If you get your water from a municipal water supply and you don’t have a whole house filter, be sure to open up windows on opposing sides of your home to get cross ventilation. Keep the windows open for five to 10 minutes a day to remove chloroform gases. One of the best types of filters I have found uses a three-stage filtration process: a micron sediment pre-filter, a KDF water filter and a high-grade carbon water filter. This combination filters chlorine, disinfection by products and many other contaminants.

Unless you take measure to ensure you, your family and people around you take clean and safe water as the government tries their best to provide clean and safer water to its citizens; you will always be at doctor’s bench.