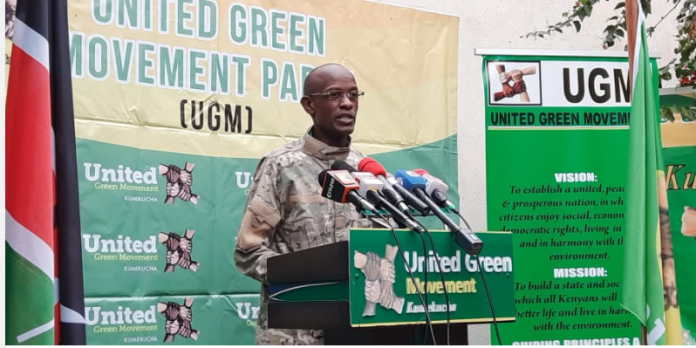 United Green Movement (UGM) party has put forward a proposal for Kenya to embrace the political parties voting system saying it will be cheaper.

This comes after IEBC requested Ksh40 billion to conduct next year’s General Election.

Through their Co- party leader Agostinho Neto, UGM said Kenya should look for ways in which voters will vote for parties rather than trying to cap the amount of money aspirants are pumping in their campaigns.

“IEBC demanding Ksh40 billion that’s outright theft, they(IEBC) has been engaging in mandates that it should not be doing like providing face masks. It should stick to its mandate of conducting elections. That way elections will be a bit cheaper,” said Neto

He said that the political framework in Kenya does not allow for monitoring of the funds used in elections therefore reverting to the party’s system will make it possible to manage and trace the funds political parties use.

In case the funding does not materialize, the commission said it will have to cut down on several activities and take interventions including reducing the number of ballot papers, the number of employees and scale down mass voter registration.

Former Prime Minister Raila Odinga has also in past criticized the poll agency over its budget estimates.

According to him, the country should be able to conduct a one ballot referendum at not more than Sh2 billion for 20 million voters. He had not commented on the election budget issued by IEBC.

WORLD GIN DAY 2021: DISHES TO SERVE WITH YOUR GIN-INFUSED COCKTAILS

CEO AFRICA - July 6, 2021 0
Working in partnership with Google.org and Google’s University Relations program, their goal is to help academics and nonprofits develop AI techniques that can improve people’s lives, especially in...

Learn about the new generation of rock climbers in Kenya