Everyday is a struggle for survival. Harsh climate changes are hitting us hard. In 2019, Kenya nearly lost half of its  forests. Deforestation has continued to be a major issue. Though the government is working on subsidising the cutting off of trees, we all have experienced the harsh changes of the climate.

Deforestation in Kenya is as a result of charcoal and timber production, agriculture expansion bringing in soil degradation, soil erosion, increased flooding and  drought. This are all things that we can relate to. We still are experiencing drought.

The drought situation worsened early this year with seventeen of the 23 ASAL counties feeling the bite. Seeing the news as animals both tamed and wild, and people so weak out off hunger and thirst was so devastating. Good  planning is needed for rainfall patterns has changed.

By cutting down trees we also displace the animals. This brings in human and animals traffic. All competing for water and food.  What happened to cut one plant two rule? We need our Flora to survive  and we should all work to decrease deforestation.

We are also experiencing increase in temperature. The air is toxic. Charcoal burning, fumes from cars and factories are dirtying the air contributing to high temperature. High temperatures brings in diseases such as malaria etc.

We should have projects like collecting water during rainy season to curb us during drought seasons. Planting of trees should be something that is part of us. We should join the government in meeting the 10% forest cover plan.

One can contribute to efforts against deforestation by planting a tree where you can, Buy recycled products and the recycle them again, buy certified wood products, go paperless and supporting products of companies that are committed to reducing deforestation.

There is much to be done not only by the government but it is an individual task to fight deforestation. The government can not achieve alone but we need to put in our effort in this so as to decrease climate changes. It’s all our call. 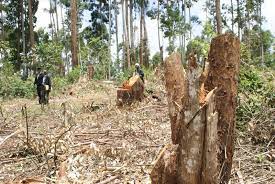