A section of women leaders under the umbrella Common Women Agenda (COWA) have called on all women in Kenyan to read and support the recently released report on the Building Bridges Initiative (BBI) saying that it will empower women in the country.

The women led by Kitui Governor Charity Ngilu,  Nominated Senator Inimah Getrude Musuruve, Maendeleo ya Wanawake Organization Rahab Mwikali, National Gender Commission Commissioner Priscillah Nyokabi and Professor Wanjiku Kabira say that the report that was released to President Uhuru Kenyatta and his handshake partner Raila Odinga as it guarantees women gains in the constitution of Kenya 2010 will not be eroded and that both the men and women of this great nation will equally achieve shared prosperity. 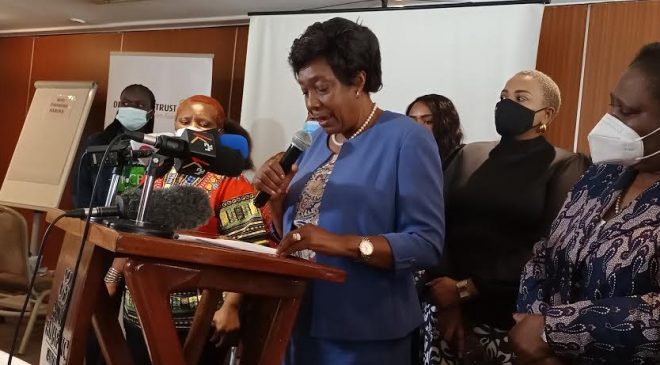 ‘In our preliminary assessment we celebrate the many gender gains in the BBI report among them, the Senate that has a balanced 50:50 representation of elected men and women and offering equal power especially to determine county allocations now set at 35% with 5% going to the Ward Development Fund. The Governor and Deputy Governor being of opposite gender with Deputy Governor assigned a portfolio,’ Ngilu said.

Ngilu also said that the other gains women will achieve in the BBI report include the Political Parties being bound to provide to the Independent Electoral and Boundaries Commission, IEBC, a list of candidates that is two-thirds gender compliant and further provides for inclusion of persons with disability.

The Kitui Governor further stated that the report also ensures protection and entrenchment of Article 43 Rights of Health, Food, Water, Education and Social Security as priority budget items in public finance and importantly requiring the President to address Article 43 implementation in the State of the Nation Address every year as an accountability mechanism. It also states that the Ward Development Fund shall be used to implement Aarticle 43 rights, which she explained will go a long way in helping women in society as they have born the blunt of lack of the same in the past.

‘The report has also thrown focus on protection against sexual and gender based violence including during elections, from teenage pregnancies and early girl marriage. The establishment of a Health Service Commission to address Health Human Resources is one to also celebrate as a milestone,’ Ngilu added.

Ngilu urged all women across the country to read and understand the report saying that none should oppose the report as released.

On her part, Professor Kabira said that the women caucus was grateful to both President Kenyatta and Raila Odinga for initiating a National Conversation on a united, stable and prosperous Kenya adding that the women agenda will be at the center of the national conversation and women should not be left behind.

‘We recognize that for a fully inclusive Nation, the BBI process should not only focus on building ethnic community bridges but also builds gender bridges. The BBI process marks such an important reflection point in the history of our country and we must seize the opportunity of this moment to secure the future of the next generation.’ Kabira outlined.

Technology is changing the informal sector in Kenya

Larmy - January 13, 2020 0
Acting county secretary leboo ole morintat during cabinet meeting Cityhall  photo/Samson wireBy Samson wireThings have not been rosy at the county 047 after the...

Winning the Battle Against Fake News