The 149cc FZ15 and 249cc FZ25 are suitable urban bikes, coming in with a new styling based on the ‘Urban Fighter Concept’, and new features for a comfortable and steady city ride and occasional trips outside the city.

The addition of the new features, which include a body design that groups the front face, fuel tank and engine together to give the FZ a bigger appearance, and a front disc with Bosch Anti-Lock Braking System (ABS) that helps in achieving improved braking performance; the FZN delivers proven reliability for commuter and leisure rides. 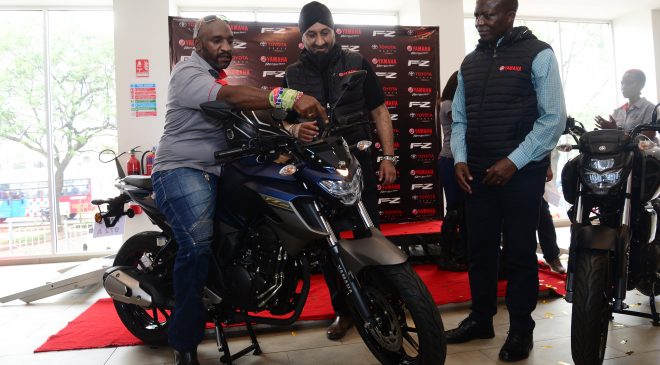 Speaking at the launch, Toyota Kenya Managing Director, Arvinder Reel said the introduction of the new models is in line with the firm’s continued drive to introduce more products that cater to the B2C segment in affordability and quality. “Motorcycles have become a popular transportation means in Kenya due to their affordability and capability to beat traffic jams in urban areas. Currently, we are seeing more professionals who own cars getting a motorcycle as an additional option to get to work conveniently and occasional use during the weekends.”

Over the years, the FZ Series’ traditional styling has been about creating and passing down a look centered on boldness, big-boned feel and straight-line acceleration. With this new model, the FZ’s powerful, dynamic feel was kept while giving it new proportions.

FZ15 mounts an air-cooled 4-stroke 149cc SOHC, 2-valve, single-cylinder fuel-injected “BLUE CORE” engine, that achieves 14% improvement in fuel economy over the existing model while offering excellent acceleration performance. “BLUE CORE” is a development ideal for next –generations engines that make riding enjoyment, fuel efficiency and environmental performance to all-new levels. The engine’s settings have been optimized to further polish the feeling when overtaking. Riders get a good feeling of acceleration while still enjoying the laidback, upright riding position.

The FZ25’s 4-stroke 249cc air-cooled, single cylinder fuel-injected engine has a strong mid-range, coupled with excellent fueling that offers power without the need for constant downshifting. The 140mm tubeless wider rear tyre, coupled with dual channel ABS plus disk brake size of 282mm at the front and 220mm at the rear offer great performance and precise braking even when the bike is speeding up, without any wheel lockups.

The front suspensions use a telescopic fork with 41mm inner tubes, also on the larger models, and 130mm of stroke which provide comfortable handling stability. The rear suspension is a lightweight Monocross suspension unit that contributes to mass centralization and provides 120mm of wheel travel, which is tuned for good balance between the spring rate and damping force.