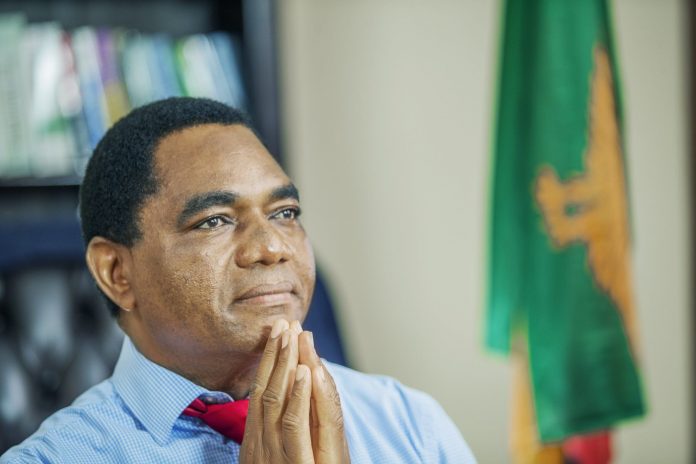 Hakainde Hichilema, his top priority is rebuilding the economy. Zambia is Africa’s second-biggest copper producer, but it became the first country on the continent to default on its debt during that COVID pandemic.

Mr. Hichilema is vowing to reduce the deficit and revive economic growth to restore confidence in the markets. He’s also vowing to tackle corruption with a zero-tolerance policy and create special courts to hear corruption cases.

Mr. Hichilema’s background as a businessman was appealing to many voters. He also said he was just a cattle boy growing up. He beat his longtime rival, Edgar Lungu, by almost a million votes, a victory hailed as a milestone for opposition movements all across Africa.

Time now for “The Exchange,” when we connect you with Zambia’s president.

I spoke earlier with Mr. Hichilema, and started by asking him, what’s the biggest obstacle as he begins forming his new government?

HAKAINDE HICHILEMA, PRESIDENT OF ZAMBIA:  I think one of the challenging things is to realize that things can be done better.

I am very positive in expressing it this way. Things can be done better. And we intend to do things better for the people that put us in office. So, really, I think that says a lot. Thank you.

It was clear that we were moving in a different direction, and there wasn’t sufficient leadership to take the country in the direction that the people of Zambia wanted to be, so leadership very critical, and ensuring that democracy works and rule of law is restored, is respected.

That presupposes — presupposes that there’s a breakdown in the rule of law. And that is true.

MADOWO:  Let’s discuss that leadership, because when you announced your finance minister, which was your first cabinet pick, you said he’s the chief financial officer of the country.

HICHILEMA:  Well, first and foremost really is to make sure that we provide the necessary leadership, in my view, to drive Zambia towards what citizens want it to be, a democratic state, a state that respects the rule of law, a state that fosters freedom of speech and other civil liberties, and a state that embraces the concept of servant leadership, and really paying attention to the needs of the people of Zambia.

Very, very critical. And building consensus around issues of accommodating, embracing diversity, and, of course, service to our people above our personal interests.

MADOWO:  What do you think was different? Because you ran for president five times before and lost.

What do you think was different from 2015, 2016, when you ran against President Lungu that won you the presidency this time?

HICHILEMA:  Larry, yes, one can say officially we lost the election in 2015, 2016. We believe otherwise.

And we understood why we did not take office, even though we believed we won in 2015. Look at the margins in 2015 between the colleague who was there and ourselves and 2016. The story is very clear.

So, we now understood what we needed to do. Number one, Larry, we campaigned to clearly achieve two, three objectives. One is to win, and win significantly, win and win big, to avoid any debate, to ensure that the voters decide who becomes the leader of this country, which team takes leadership of this country, and not those who count votes.

And the only way we thought, critical way, major way we were to do it is to win, and win big. We did that.

Secondly, Larry, was to protect our votes at all cost until we are sworn in. We did that. I think these are the two fundamental things that made a difference and took us into public office, which we were not able to do in 2015 and 2016.

MADOWO:  Considering that Zambia defaulted on its debt because of the pandemic, the country is in a recession, will you be seeking a bailout, say, from the International Monetary Fund?

Have — is that something that’s on the table?

It’s very important for not just the numbers in terms of assessing debts or facilities that are at a lower price, but also to make sure that we can send a message to the global community, financial global community, that we are here to do business, we will respect the debts that are there, we will work together with lenders to come out of this debt crisis that Zambia has found itself in.

MADOWO:  Mr. President, one of the obstacles you will face in trying to bring up the economy is the pandemic. We’re still in the middle of a pandemic.

And so far, only 1.7 percent of Zambians are fully vaccinated, while, here in the U.S., they are beginning to give out booster shots. The U.K. is doing the same, France, Germany.

Do you think this is a fair arrangement, where people in the richer parts of the world are getting booster shots, third doses, while, in many parts of Africa, people don’t have vaccines, just the first shot?

HICHILEMA:  We, as the African countries, we’re still (AUDIO GAP) countries, most of us. And we don’t have as much resources as the First World.

So, the First World, therefore, needs to take account of the fact that, unless we bring COVID-19 under control globally, it will continue to be a menace. So it is not correct to vaccinate in — citizens of the developed world, and not match then to citizens of Africa and other poorer countries in Asia and elsewhere, because we will create a continent called Africa where the pandemic, coronavirus, will begin to mutate, because we’re not bringing it under control.

We are not vaccinating enough. So, mutations here eventually will spread into Europe, into America, into Japan and elsewhere. That will not be helpful to anyone, and it will be at a greater cost.

So I think it’s the interest of the global community to allocate more vaccines, of course, more testing capabilities, basic things that are required, PPEs, as they’re called, personal protective equipment. All of that package, more attention must be given to Africa, so that we can bring the coronavirus pandemic under control in the whole global community, not only in parts of the global community.

MADOWO:  What is your own plan in Zambia for dealing with the pandemic and bringing it under control, so that you can bring back the economy and implement all these plans you have, Mr. President?

HICHILEMA:  Those in the front roles and are likely to contract this disease must, must, must be protected in the first place.

And the resources that have already been allocated to this fight against — in the pandemic will be utilized prudently, no wastage, nor thefts around them, because we have seen a few strange things happen, at the expense of focusing on delivering oxygen, for example, in hospitals, because (INAUDIBLE). That’s unacceptable.

And we will make sure that we address this issue in a dramatic fashion.

MADOWO:  Your own experience, you say you have been arrested 15 times since you joined politics. You even went to jail for four months for blocking the motorcade of President Edgar Lungu.

Now that you’re president, do you bear any bitterness, any ill will toward your predecessor?

HICHILEMA:  We have a lot of energy, Larry.

But our energy will not be wasted on revenge, retribution, or, indeed, any negative vices, not at all, not at all. We know what was wrong, what was done wrong against us. It’s common knowledge in our country.

It is also known who did that against us. But we are not there to revenge or avenge or to push retribution. If we did that, Larry, it means we don’t occupy any higher ground than those who did that to us.

MADOWO:  President Hakainde Hichilema, thank you so much for your time, sir. We appreciate it.

Thank you for coming to talk to us here on CNN.

HICHILEMA:  Larry, thank you very much for having me. It’s a pleasure.

Wish you well. Thank you.

End Wildlife Trade to Save the African Lion

What would happen if tigers migrated to Africa?